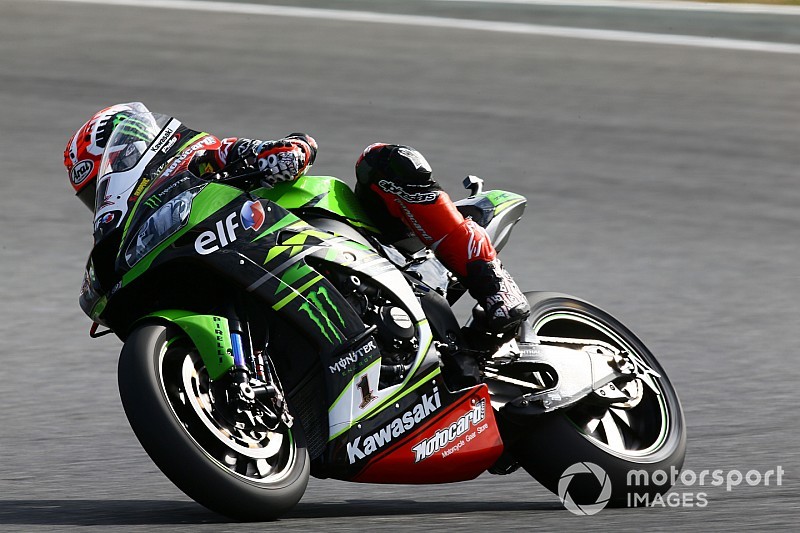 Rea battled with poleman Sykes in the early stages but, once clear, he was able to open up a gap Sykes could do nothing to close and eased to the chequered flag for his 13th win of the season.

After beating Rea to pole by 0.147s in qualifying, Sykes pipped his KRT counterpart to the first corner at the start, while Lorenzo Savadori maintained third on his Milwaukee Aprilia ahead of Barni Ducati's Xavi Fores.

Rea hounded Sykes across the first lap, but the Yorkshireman just held sway as they entered the pit straight for the first time.

But a slightly wider line at Estoril corner on lap two allowed Rea to scythe through on the inside to take the lead away from Sykes, while Fores took third from Savadori at the Adelaide hairpin seconds later.

By lap three, Rea was already nine tenths clear, and steadily opened this gap up to over two seconds as the race entered its closing stages.

Sykes resisted some early pressure from Fores and managed to claw a few tenths back on Rea in the middle of the race, but the leader immediately responded to these threats.

Untroubled in the remaining laps, Rea eased across the line to become the 2018 WSBK champion to equal Carl Fogarty's tally of four titles and become the first rider in history to win four in succession.

Teammate Sykes could do nothing to deny his teammate his 67th career win in second, while Fores held Savadori at bay to take his first rostrum finish since race one of the Aragon round back in April.

Ducati's Chaz Davies closed in on Savadori and Fores ahead in the latter stages, but was unable to advance from fifth, while teammate Marco Melandri completed the top six having started from 12th.

Seventh-placed Michael van der Mark was the only Yamaha to make the points after teammate Alex Lowes crashed out of the top six early on at Lycee, while Toprak Razgatlioglu muscled his Puccetti Kawasaki through on Eugene Laverty (Milwaukee Aprilia) and Loris Baz (Althea BMW) at the last corner to take eighth.