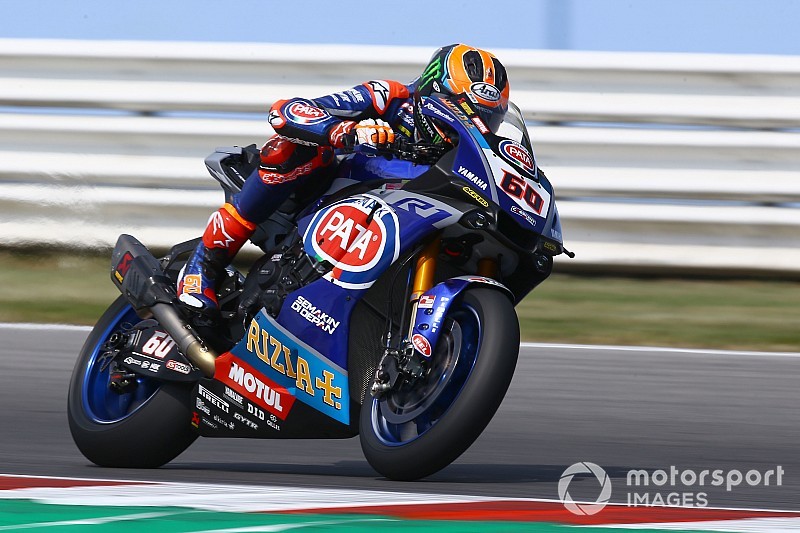 Michael van der Mark topped Friday World Superbike practice at Misano, but suffered a massive high-side crash at the end of FP2, which brought out the red flag.

Jerez race winner van der Mark took over at the top of the combined timesheets in the final minute of FP2, but was violently flicked from his Yamaha at the final corner on his last lap, which led to a red flag while he was attended to by medical staff. He was then taken to the medical centre.

Jonathan Rea set the pace in the opening 50-minute session of the day with a 1m36.029s, having topped much of FP1 on his Kawasaki, with van der Mark trailing him by two tenths.

The reigning world champion's FP1 lap remained the reference as the second session progressed into its final minutes, though Rea would be unable to better it after crashing at Turn 2 late on.

Moments later, van der Mark finally demoted Rea to second on the combined times with a lap of 1m36.021s to go 0.008s quicker before his heavy fall.

Ducati's Alvaro Bautista was fastest briefly on the FP2 timesheets with a 1m36.156s, but was shuffled back to second by van der Mark, which also moved him to third on the combined standings.

BMW has brought updates to Misano for the S1000RR, with Tom Sykes using them to good effect to set the pace in FP2 early on, before going on to finish the day sixth-quickest ahead of Barni Racing's Michael Ruben Rinaldi.

Chaz Davies trailed the customer Ducati rider by 0.081s, with Marco Melandri (GRT) and the sister KRT machine of Leon Haslam rounding out the top 10.

Wildcard Michele Pirro crashed at the fast Curvone turn in his first WSBK practice in four years, but brushed this off in the afternoon to finish up 12th fastest on the Barni-run Panigale V4 R.

Fellow Ducati test rider Lorenzo Zanetti, who is deputising for the injured Eugene Laverty at Go Eleven, was almost half a second adrift in 15th ahead of wildcard Samuele Cavalieri.

Alessandro Delbianco was top Honda runner in 19th, with the works Fireblades of stand-in Yuki Takahashi and Ryuichi Kiyonari trailing.

Van der Mark ruled out of Misano after practice crash