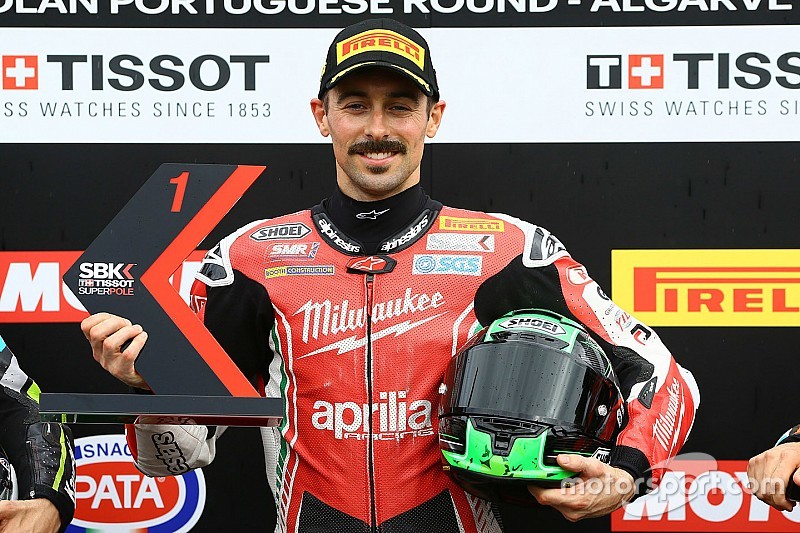 Laverty's Milwaukee Aprilia teammate Lorenzo Savadori set the pace in SP1, and used his prior track knowledge to set the early pace in the pole shootout session with a 1m41.387s.

Kawasaki's Rea slotted into second by just over a tenth, though was pushed back to third by Laverty, who posted an identical 1m41.493s to his fellow Ulsterman.

Rea was the first to complete his flying lap on the qualifying tyre in the dying seconds of SP1, and took provisional pole with a new outright lap record of 1m40.705s, with Loris Baz – who progressed through SP1 with along Savadori – shadowing him in second.

But Laverty lit up the timing screens on his attempt, and edged ahead of Rea by 0.060s with a 1m40.705s to claim Aprilia's first pole since the French round in '15 and the first for Shaun Muir Racing.

Ducati's Marco Melandri completed the front row with a lap jut under a tenth outside of Rea's lap, while Savadori heads row two from Yamaha's Michael van der Mark and the second Kawasaki of Tom Sykes.

Baz was shuffled back to eight at the final reckoning, with Jordi Torres – who will line up on the MotoGP grid with Avintia at Aragon next weekend – and Toprak Razgatlioglu rounding out the top 10.

Michael Ruben Rinaldi was just a tenth outside of his fellow WSBK rookie Razgatlioglu in 11th, with Alex Lowes left in 12th having been unable to complete his Q-tyre lap due to a crash at the final corner.

While Savadori and Baz made it through SP1, Ducati's Chaz Davies was not so fortunate.

An improvement from Baz pushed Davies out of the SP2 progression place, and he remained there as he began his final lap, with Honda's Leon Camier pushing him down to fourth in the session.

Davies' final lap proved nothing special and he will start from 14th behind Camier, with the sister Ten Kate bike of Jake Gagne completing the top 15.