Portimao: Superpole goes to Sykes for a blink of an eye 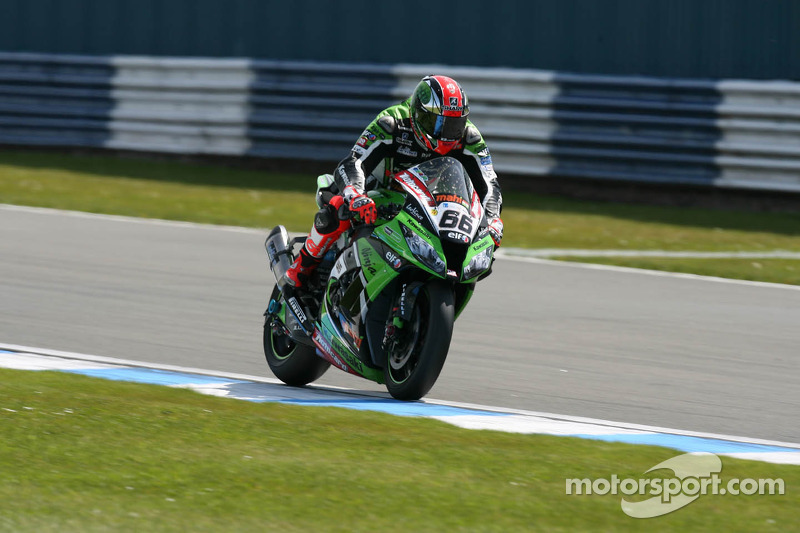 In the World Supersport qualifying, it was again Sam Lowes but Kenan Sofuoglu did put up a fight.

Portimao (Portugal), Saturday 8 June 2013 - Under the grey skies of the Autodromo International do Algarve, the eni FIM Superbike World Championship riders tackled today the 6th Tissot-Superpole of the season.

An incredibly close battle for the top slot on the grid saw Tom Sykes (Kawasaki Racing Team) scoring his 16th career pole position for just a thousandth of a second - that translates into only 4.5 cm - on Eugene Laverty (Aprilia Racing Team). The same gap between the top-2 riders in Superpole happened only once before, as in 2009 Ben Spies snatched pole from Michel Fabrizio at Kyalami. The 1'41.360 set by the British rider meant also a new Best Lap for the Portuguese track.

Tom Sykes: “I am really happy to have five Tissot-Superpole wins on the bounce, it is a record for me. I was able to do my time on a dry and sunny track but Eugene Laverty almost beat me to it this time. I am looking forward to two races tomorrow and I am expecting them to be difficult. We took a circuit best lap and I was surprised at that because last year I put in a good lap in better conditions. I think it shows that Pirelli have made a good step with the tyres."

Eugene Laverty: "You can't get any closer to the pole than that! In any case I'm happy to be on the front row. I made a small mistake on my fast lap and I thought I had compromised my performance. It's a shame for that thousandth of a second, but in any case we're ready for the races tomorrow and that the weather conditions will be good."

Today's Superpole was partly influenced by the weather, as drops of rain began to fall moments before the start of Superpole 2. As per the 2013 WSBK Sporting Regulations, a final 20-minute wet session took place with all 12 riders involved. The conditions quickly improved, though, meaning the riders could fight for top positions on the grid on a dry track.

Dutchman Michael van der Mark (Pata Honda World Supersport) was 6th ahead of Jack Kennedy (Rivamoto Honda) and Luca Scassa (Intermoto Ponyexpres Kawasaki). The Irishman had a collision with Lowes during the session from which he escaped uninjured, despite some initial concern.