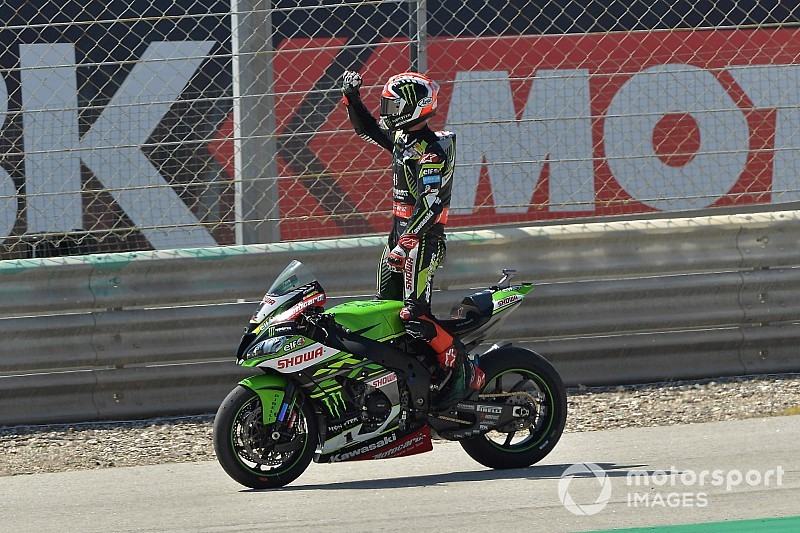 Jonathan Rea eased to his second win of the Portimao World Superbike weekend, while Alvaro Bautista recovered from a poor start to claim second in the Superpole race.

Poleman Rea nailed his launch off the line and once again proved untouchable, with Bautista only just holding Yamaha’s Alex Lowes at bay to claim the runner-up spot.

A day on from their first-corner clash, the battle between the Ducatis early on was hard, with Davies throwing his Panigale V4 R up the inside of Bautista at Turn 8 for ninth on lap two.

Bautista soon retaliated, and began to climb back through the field with a similarly brave Turn 8 lunge on Yamaha’s Michael van der Mark moving him up to eighth on the following tour.

Out front, Rea soon had a lead of over a second, with Lowes finding a way through on the sister Kawasaki of Leon Haslam and Sykes to run second.

Bautista’s charge continued further behind, as he used the power of the V4 R to ease ahead of GRT’s Sandro Cortese at the end of lap four, while doing the same to Haslam and Sykes in one fell swoop on the run to the first corner two tours later.

Rea had opened up an advantage of 2.2s by lap seven, with Lowes just six tenths ahead of Bautista.

The Ducati quickly wiped this out and attempted a move for second at the start of lap nine – but Lowes held onto it with an ambitious counter-attack at the first corner.

Bautista seized the place on the run across the line to start the final lap, but was only two tenths ahead at the chequered flag following a relentless last tour from Lowes.

Rea’s 11th win of the year opens up his championship lead over Bautista to 96 points, while also securing him pole position for the second feature race.

Puccetti Kawasaki’s Toprak Razgatlioglu took fourth after a fierce fight with Haslam late on, with the latter completing the top five ahead of van der Mark.

Sykes faded to seventh in the end, with Cortese and Ten Kate Yamaha’s Loris Baz taking the last points in eighth and ninth places ahead of Davies in 10th.

Bautista "lucky" not to crash after Davies lunge