Jonathan Rea ended Friday practice for the Portugal World Superbike round fastest of all ahead of Marco Melandri, while Chaz Davies will face SP1 after a fiery FP3 crash. 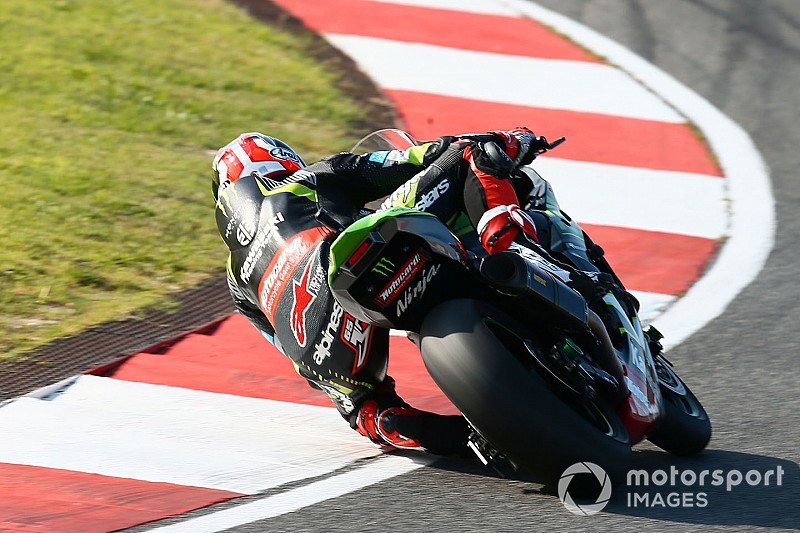 WSBK's first official session in 10 weeks got underway with championship leader Rea setting the early pace at 1m42.106s, which he improved later on to a 1m42.069s.

The Kawasaki rider put in one final improvement at the end of the 40 minutes of 1m41.817s, putting him half a second clear of the field and the same margin outside of the outright lap record.

Rea held onto top spot in the second session, though was three tenths off of his best pace with a 1m42.183s, with Ducati's Melandri – who will be replaced next year by MotoGP rider Alvaro Bautista - shadowing him.

Despite his dominance, Rea's FP2 was not without incident. Having just set the session-best time in the opening minutes, he suffered a small crash going through Turn 5.

Improvements on the combined standings were few and far between in FP2, with Lorenzo Savadori on the Milwaukee Aprilia the most notable improver in ninth overall with a 1m42.969s.

Davies' summer break was affected by separate breaks of the same collarbone, and the Ducati rider made a low-key start to his Friday in 15th on the combined timesheets coming into the final session.

Keen to make amends, Davies' day was ended when a mechanical issue led to a fiery crash at Turn 8 in the opening stages of FP3. The red flags were brought out to clean up the liquid left on circuit by Davies' expired Panigale.

Rea led the session prior to the stoppage with a 1m42.526s, while Kawasaki stablemate Toprak Razgatlioglu utilised a tow from the Ulsterman to usurp him a few minutes into the restart with a 1m42.383s.

Melandri took over top spot in the session late on with his best lap of the day of 1m42.003s, moving him up to second overall ahead of Torres, who held onto the top three on combined times with his FP1 effort.

Rea looked set to finally beat the overall best time he established in FP1 after posting the fastest first sector of the day on his closing lap, but was unable to improve and stayed second.

However, no-one was able to put his 1m41.817s under threat as FP3 wound down, keeping him top overall, though his advantage was cut to just under two tenths by Melandri.

Razgatlioglu trailed Torres in fourth on the combined standings ahead of the second Aprilia of Eugene Laverty, while Tom Sykes was seventh on the sister KRT behind Fores.

Lowes' late improvement dropped Loris Baz into SP1 by just 0.010s, while Davies was left in 15th after his crash.

Davies a doubt for Portimao after breaking collarbone