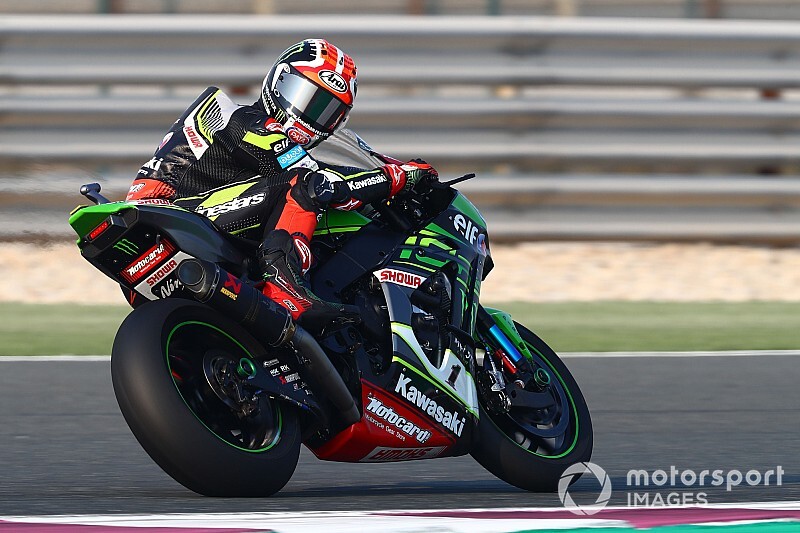 Jonathan Rea grabbed his seventh pole of the 2019 season, after beating Alex Lowes in the final World Superbike qualifying session of the year in Qatar.

Rea led the opening stages on his Kawasaki, and went early with the switch to the qualifying tyre to secure top spot with five minutes remaining.

The world champion’s opening effort of 1m57.586s on race rubber only kept him at the top of the pile for a moment, as Yamaha’s Alex Lowes quickly deposed him with a 1m57.285s.

The works Yamaha rider – who leads teammate Michael van der Mark by a point in the battle for third in the standings – improved marginally on his following tour to a 1m57.217s.

This came under no threat as the rest completed their race tyre runs, with Rea the first to move over to the qualifying rubber in the latter stages.

Rea lit up the timing screens across his sole effort of the tyre, and produced a 1m56.246s to go close to a second clear of the field.

GRT Yamaha’s Sandro Cortese was his closest challenger at the end of his final lap, though was over two tenths adrift.

Lowes set a fastest first sector, but lost time over the rest of the lap relative to Rea and could do no more than second with a 1m56.431s.

Cortese held onto a front row place in third, with BMW’s Tom Sykes heading the second row ahead of Ten Kate Yamaha’s Loris Baz and the sister factory Kawasaki of Leon Haslam.

Alvaro Bautista proved best of the Ducati runners in seventh, with van der Mark trailing the former MotoGP star in eighth ahead of the second BMW of Markus Reiterberger and Puccetti Kawasaki’s Toprak Razgatlioglu.

Ducati’s Chaz Davies has set the pace throughout practice on his Panigale V4 R, but struggled to replicate this form in Superpole and could only muster a 1m57.710s for 12th on the grid.