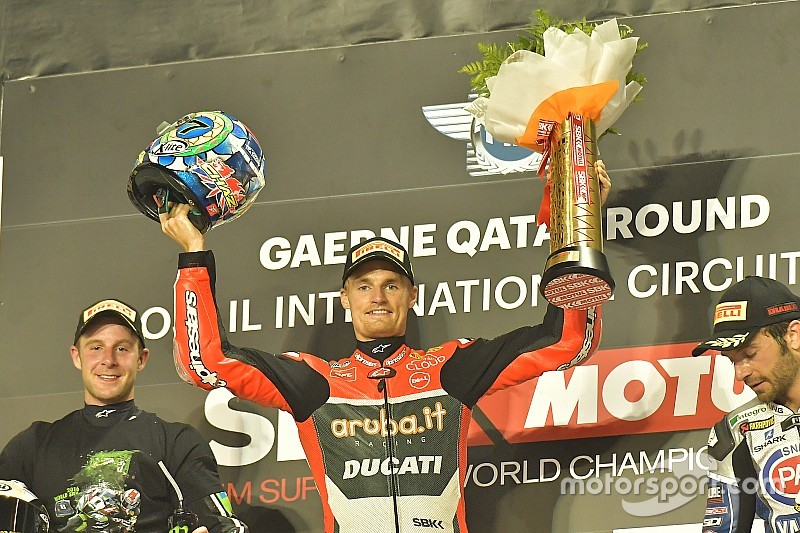 Chaz Davies completed his perfect run at the end of the 2016 World Superbike season by winning Race 2 in Qatar, which was red-flagged due to an oil spill.

Similarly to the start of Race 1, Davies made a move on newly-crowned champion Jonathan Rea at Turn 1, but the latter fought back to retake the lead on the outside of the second corner.

Davies got ahead later on the opening lap, and soon he led the race by himself after Rea ran wide at the first turn on the second lap, dropping to 13th.

Davies quickly built a lead of a second, taking advantage of Tom Sykes passing Sylvain Guintoli for second and the Welshman rapidly extended the gap even further.

His lead was up to nearly three seconds when the Kawasaki of Saeed Al-Sulaiti caught fire and, the local rider having spilled oil on track, the race was red-flagged.

Davies kept the lead from Sykes following the restart, and the duo were soon joined by Rea, who forced his way up from ninth in just two laps.

Rea soon also went past his Kawasaki teammate and, having shown superior pace, he was close behind Davis for the final three laps.

However, Rea could not make an overtaking attempt and let Sykes past on the final lap, allowing the latter to beat Davies to second in the standings.

De Rosa eventually only finished ninth, having also been passed by Nicky Hayden, who started from the pitlane for exceeding his allocation of engines, and Xavi Fores.

The top 10 was completed by Yamaha's Alex Lowes, who ran wide in tandem with Lorenzo Savadori at the start.

Davide Giugliano failed to kick off the race after a crash in Race 1, causing his old shoulder-injury to cause him pain once again.