World Superbike champion Jonathan Rea resisted a late charge from Chaz Davies in Qatar race one to secure his 14th win of the season and the manufacturers’ title for Kawasaki. 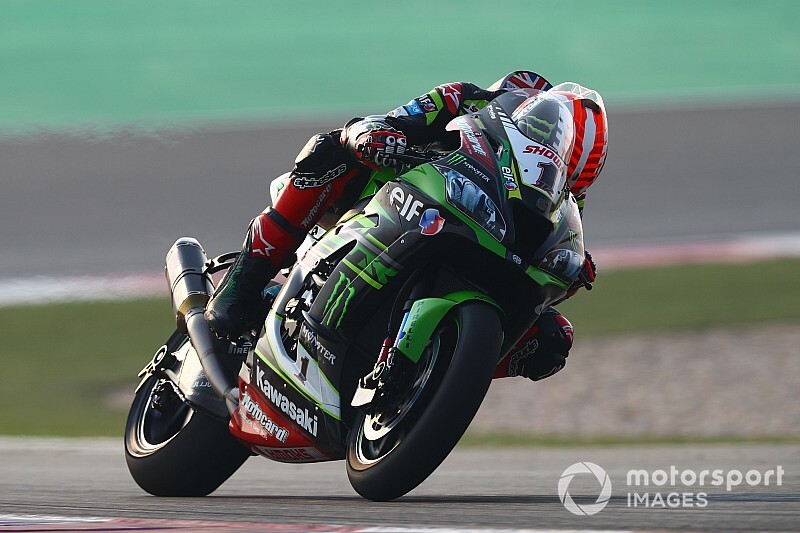 The Kawasaki rider grabbed the holeshot from pole position, and was never removed from the lead for the entire 17 laps despite a moment late on allowing Davies to mount pressure on him.

Rea led Yamaha rider Lowes, GRT’s Sandro Cortese and Davies on the opening lap, with Tom Sykes dropping to fourth after running too into Turn 1 having briefly held second.

The BMW rider’s race would last just 15 more corners, as he would run into the back of Leon Haslam’s Kawasaki at Turn 1 at the start of lap two.

Rea and Lowes quickly broke away from the chasing Cortese and Davies, with the Ducati rider seizing third from the GRT Yamaha rider at Turn 7 on the sixth tour.

The 2020 KRT teammates ran line astern for half the race, with the gap between Lowes and Rea hovering around the three-tenth mark.

Rea began to open his advantage out slightly to half a second by lap 10, while Davies wiped time out of Lowes over the next few tours.

Davies moved ahead of Lowes at the final corner to begin the chase on Rea with five laps to go, and was thrown a chance when the Kawasaki rider had a moment through Turn 8 and ran wide at the corner after as a result.

This allowed Davies to close to within eight tenths of the lead, though Rea regrouped and soon had the gap back out to over a second to ease to the chequered flag to wrap up Kawasaki’s fifth-successive manufacturers’ championship.

Davies recovery from 12th on the grid concluded with runner-up spot to Rea, while Lowes’s hopes of claiming third in the standings took a step forward after he held third and Yamaha teammate Michael van der Mark was pipped to sixth by Haslam.

Toprak Razgatlioglu was a factor in the battle for fifth with Haslam, van der Mark and Baz for much of the race, but the Puccetti rider ended up 11th after running off track at Turn 6 in the latter stages.

Leandro Mercado was forced to retire due to a mechanical issue with his Orelac Kawasaki, while Pedercini’s Jordi Torres didn’t even make the start after crashing at Turn 1 on the warm-up lap.