Kawasaki’s Jonathan Rea feels the 2021 World Superbike title race has been reset as he heads into the final six rounds of the season level on points with Yamaha rival Toprak Razgatlioglu.

Razgatlioglu has successfully overcome what had been a 37-point deficit to Rea after last month's Assen round with three victories across Most and Navarra races, his most recent success coming in Sunday's second encounter at the Spanish circuit.

The 24-year-old has arguably emerged as the rider with the best shot of ending Rea's dominance in WSBK, forcing the 34-year-old into a number of mistakes this year.

Rea now finds himself tied with Razgatlioglu on 311 points, although the Turkish rider is placed on the top spot in the championship on countback. Should there be a similar tie-break at the end of the season, points scored in Superpole races will not be considered when determining who gets to lift the title.

Speaking about the title battle, Rea says he would like to forget the events of the first half of the season and start afresh at Magny-Cours, treating the season as a six-round championship that runs until the new Indonesia street race in Mandalika - the status of which remains provisional.

"The guys were just better today, both Toprak and Scott did an awesome race," said Rea. "I tried to go there for about 10 laps and I was just there, it was ebbing and flowing. I was quite good in turns 3-4-5-6, that little bumpy section, but as soon as my front tyre started to go out I was losing where they were strong.

"Good job to [Razgatlioglu and Redding], it was a fighting weekend for us but we were there. Not a track that suits us the best, so I try to be positive because we've got some really good tracks coming up for us but competition is hot.

"Everyone is doing hard but I'm pushing on my maximum and these guys are just that little better here in Navarra.

"[We are] level on points with six to go. We'll just forget the first part of the season, knowing that it's good and start with a six-round championship now. So excited to get stuck in and see what we can do."

Ducati's Redding has thrust himself back in the championship battle with a double win at Navarra and is now just 38 points adrift of the leading duo - with 62 points on offer every round.

Rea expects the title fight to go down the wire this season, reminiscent of his 2007 campaign in British Superbike when he finished second to Ryuichi Kiyonari but ahead of current Honda rider Leon Haslam.

Asked if he has ever faced a similar three-horse race for the title, Rea said: "I say Chaz was my big rival for quite a few years, then [Alvaro] Bautista [and] Scott coming [in 2020]," he said.

"Maybe BSB 2007, my last year in BSB. There was Greg [Lavilla], Haslam and Kiyo, and any one of us could have won every weekend.

"I think the championship came between myself and Kiyonari and Haslam, a last round showdown. That was exciting. I don't see why it will be different [this year].

"Hopefully [the Kawasaki] ZX10RR steers well around Argentina and Indonesia because two [extra] races are really kind for the championship."

Razgatlioglu qualified a disappointing eighth on WSBK's first visit to Navarra in Spain, leaving him with a mountain to climb in the first two races.

He could only manage a third-place finish in the opening two encounters of the weekend, but passed both Rea and Redding in Sunday's second full-distance race to maintain his record of winning a race every round since Misano in June. 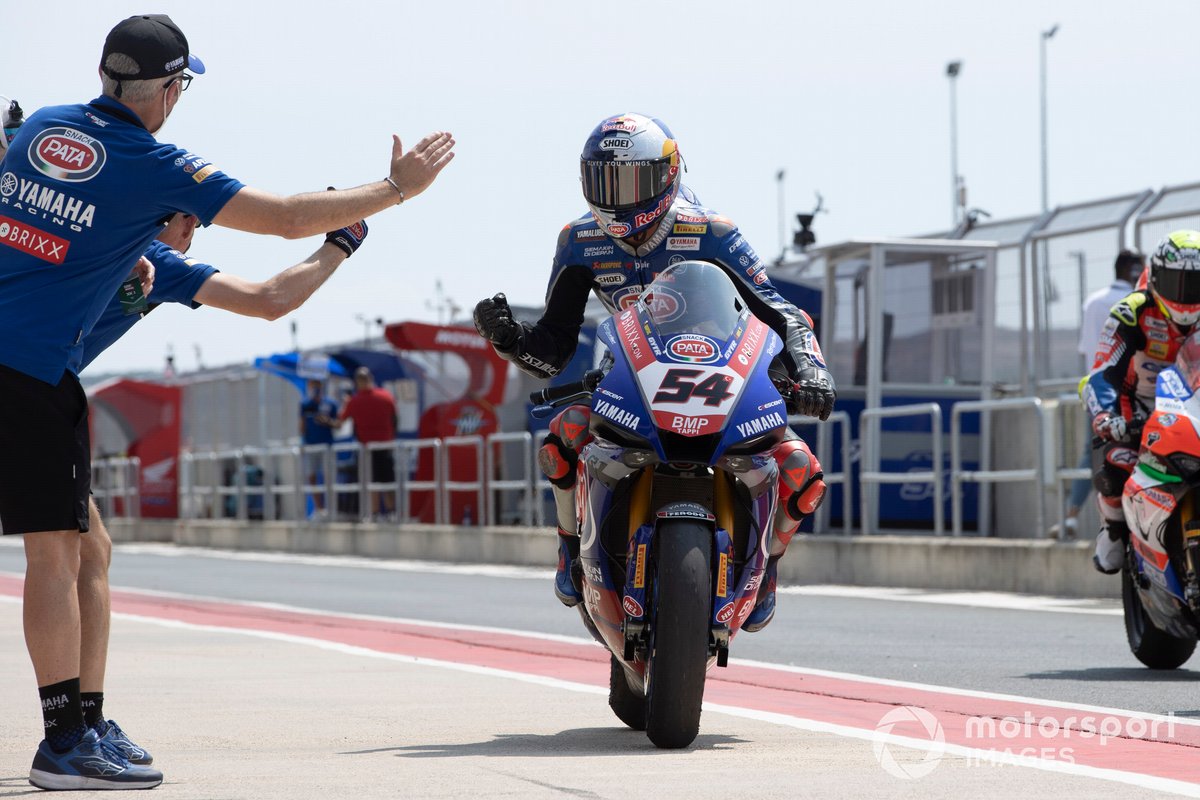 The Yamaha rider feels a set-up change made by the team was crucial in his victory over his two title rivals, having admitted that he was struggling for motivation after Friday practice.

"First I'd like to say thank you to my team because they did an incredible job for the last race, we changed some set-up and I felt the bike was much better and I could finally win, because this weekend for me wasn't easy," he said.

"Every race I'm fighting for a good position but finally we won again and for me it was a very important win. Everybody was surprised but I'm relieved today.

"I think it was better for me because I was not strong this weekend. Every race I made [progress] step by step and in the last race I finally won. This is very good and I'm really happy because we were working too much and on Friday my motivation was down.

"In the first race I was fighting for second position but I said, 'okay, better than crash is [finishing] P3'. Yeah, I'm really happy."

Quartararo 'had no chance' to win MotoGP title decider in Valencia