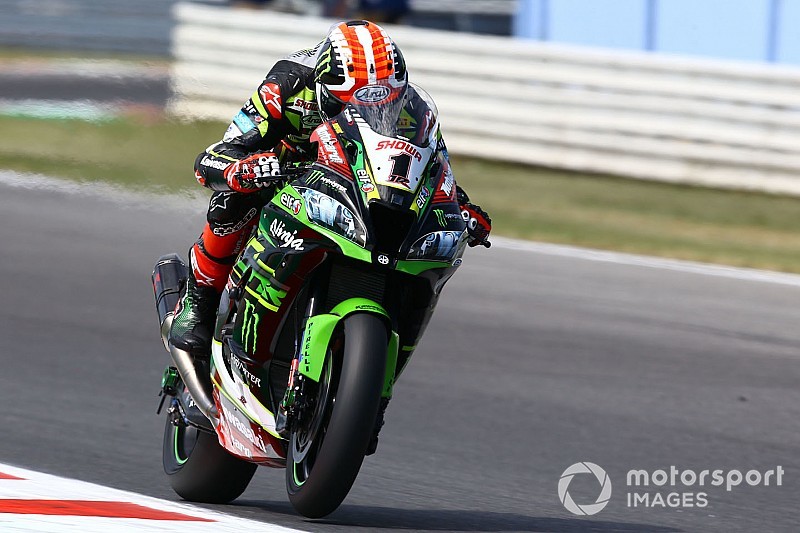 Jonathan Rea took a dominant World Superbike pole at Misano by 0.355 seconds from Sandro Cortese, with championship leader Alvaro Bautista off the front row in fifth.

A flurry of fast laps at the end of the 25-minute session on qualifying tyres led to the pole position swapping hands four times, with Rea emerging on top with a final effort of 1m34.596s on the factory Kawasaki.

It was the sister KRT ZX-10RR of Leon Haslam who led Superpole initially before Rea took over with a 1m35.658s on his first race tyre run, which he improved by two tenths a few minutes later.

Rea's lap stood as the benchmark as the field began its last run in the session on the qualifying tyre, with GRT Yamaha's Cortese – who was just 0.063s behind Rea after his second race tyre run – deposing him first with a 1m35.356s.

The German rider's stint at the top was brief, however, with Yamaha counterpart Alex Lowes on the Pata Yamaha moving to pole with a 1m35.084s.

Tom Sykes, who has scored pole at Misano at the last seven events, then put his updated BMW top of the pile with a 1m34.976s on his final effort.

But a first BMW pole in WSBK in nine years would be denied by Rea, who blitzed the field with his concluding lap of 1m34.596s.

Cortese moved to second with a 1m34.951s on his following tour, edging Sykes back to third to complete the front row for this afternoon's first feature race.

Lowes heads the second row from Ducati's Bautista, who misses the front row for the first time in his debut WSBK season. Haslam will start sixth, after his best lap was cancelled late on.

Michael Ruben Rinaldi was seventh, heading Barni teammate and wildcard Michele Pirro by a tenth and a half, with Chaz Davies (Ducati) and Puccetti's Toprak Razgatlioglu completing the top 10.

Loris Baz, who topped the damp FP3 session on Saturday morning, crashed the Ten Kate Yamaha late on in qualifying, and was left in 16th on the grid as a result ahead of Eugene Laverty's stand-in at Go Eleven, Lorenzo Zanetti.

Van der Mark ruled out of Misano after practice crash