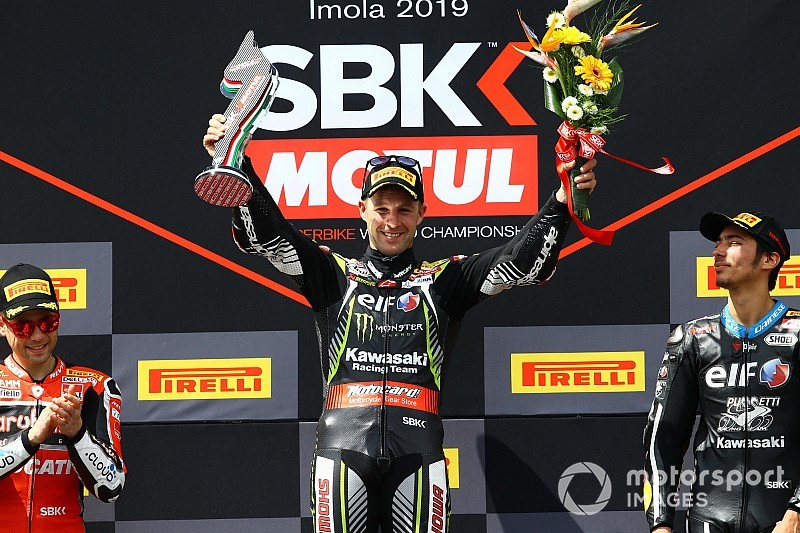 While Davies kept the lead from the fast-starting Rea at Turn 1, the latter made a move stick at the Villeneuve right-hander before the Ducati rider's bike slowed down a few corners later.

Davies' retirement made his teammate Alvaro Bautista as Rea's main rival, but the Spaniard did not have the pace to win for the first time this year.

Rea quickly pulled away and was faster than Bautista throughout the race, cruising to the finish to win by 7.8 seconds after giving up nearly three seconds on the last two laps.

Bautista had a lonely race in second with Tom Sykes also looking set to comfortably take third for BMW before he had to retire with a mechanical problem.

That promoted the group behind to the fight for the final podium position. It was initially led by Yamaha duo Alex Lowes and Michael van der Mark but the former, struggling with illness, later dropped out of the fight.

Van der Mark held off the Kawasakis of Toprak Razgatlioglu and Leon Haslam for a while but the Turkish rider made a move soon after Sykes retired.

Razgatlioglu was closely followed by van der Mark for most of the race, but the duo began fighting in the late stages.

The Dutchman was slightly wide and unsuccessful when he tried to make a move at Rivazza, but he then passed Razgatlioglu at Tamburello on the penultimate lap.

Razgatlioglu however was back in third at Tosa, a position he held on to throughout the final lap.

The Dutchman instead focused on defending from Haslam, whose two mistakes at Variante Alta kept him out of the fight for several laps.

Haslam ultimately had to settle for fifth as Marco Melandri (GRT Yamaha) led Lowes for sixth.

Tommy Bridewell (Go Eleven Ducati), who is replacing the injured Eugene Laverty, finished 12th in his first WSBK appearance in almost a decade.

Sandro Cortese crashed out at Turn 12 while Leon Camier did not take the start after he injured his shoulder in a qualifying accident.