Why Rea is under pressure like never before in 2021

Jonathan Rea has won every World Superbike title since 2015 and at the halfway point of the 2021 season he leads the standings. But he faces his toughest test yet to come out on top against Toprak Razgatlioglu.

Six rounds down, seven to go (at least officially) in the 2021 World Superbike season, and it’s Jonathan Rea who leads the championship - no shock there. What's more surprising is that gap between the six-time world champion and nearest rival Toprak Razgatlioglu is a meagre three points.

That follows off the heels of a fraught Most round for the Kawasaki rider which yielded just two third-place finishes and Rea’s lowest three-race score, 23 points, since the introduction of the three-race format in 2019.

And the reality is that, had Garrett Gerloff not done Rea a big favour at Assen by wiping out Yamaha stablemate Razgatlioglu at Turn 1 in the final race, Rea would be looking at a potential 27-point deficit to the Turkish rider armed with a bike that is not the all-conquering weapon it once was.

You could equally argue that Razgatlioglu was fortunate that Rea crashed out of Race 1 at Most, registering his second ‘zero’ of the season following the final race at Donington Park, but then again Rea’s tumble on the bumps of Turn 1 at the quirky Czech track was an unforced error committed in the heat of battle against Razgatlioglu.

“I could have cruised round for a podium, but I want to fight, it’s my character,” was Rea’s assessment of the situation. Few would argue he was in the wrong to push hard, but the reality is now that the Ulsterman is having to dig deeper than ever before in order to contain a new threat in the form of Razgatlioglu. 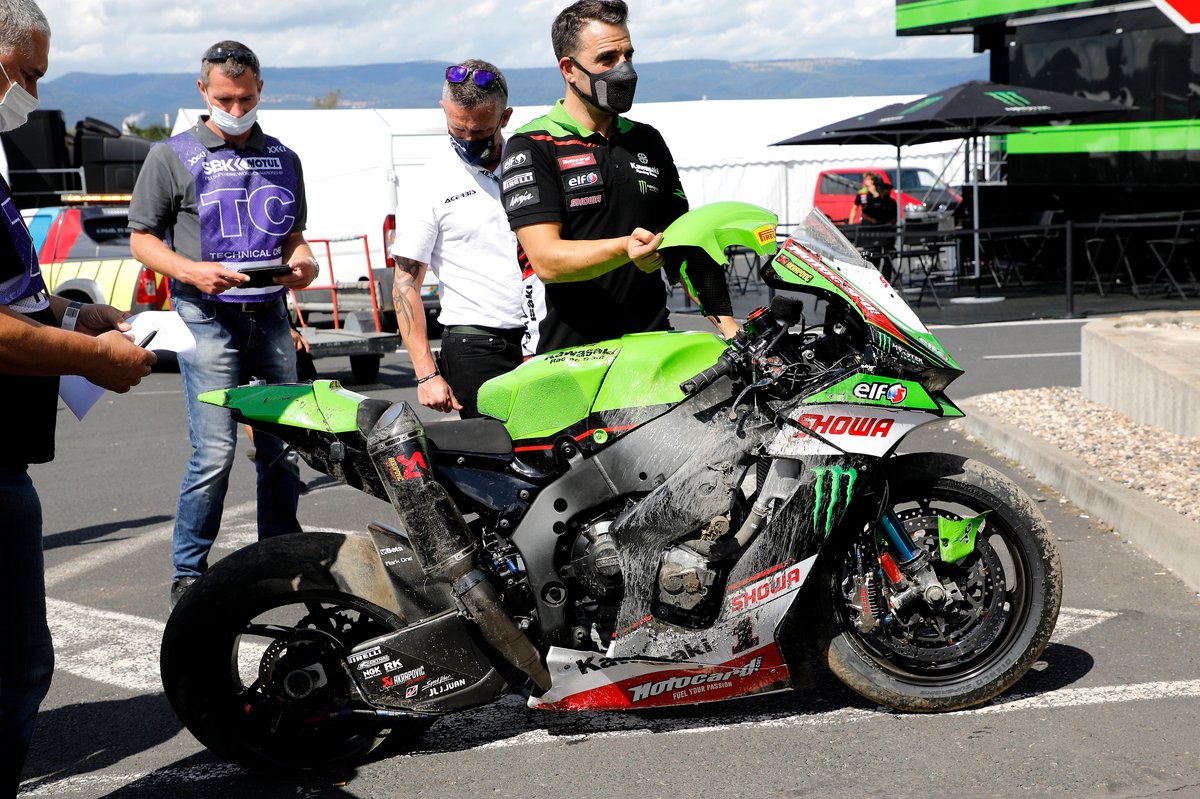 Recalling the events leading up to the Most crash, Rea said: “I can’t pass him. I can’t pass the Yamaha on the straight, I can’t pass Toprak on the brakes. We had a lot of traction so I could so some different stuff and get close. But I couldn’t see where to pass and go forward.

“I used to have the luxury of being able to pass on the straight. But I’m taking 110 percent out of the package in every lap of every race, and when you do that, you’re on the limit. Now the competition is very high. Some days we can work the magic, some days it’s tougher.”

Some years ago, Rea had highlighted the likely emergence of Razgatlioglu as the biggest potential threat to his dominance. Indeed, without wishing to devalue Scott Redding’s efforts last year, this season marks the first time that Rea is having to deal with a sustained challenge from a rider much younger than himself, and arguably one equally as talented.

Of course, Rea had to battle hard to turn the tide against Alvaro Bautista in 2019, when the newly-introduced Ducati Panigale V4 R swept all before it in the early rounds of the season. But there seemed to be a certain calmness in Rea’s riding during that time, as exemplified by his impeccable run of second-place finishes behind Bautista.

There were no instances of Rea crashing or making significant errors trying to achieve the impossible. And once the Ducati arrived at tracks less-well suited to its MotoGP-derived machine, Rea took advantage, amped up the pressure on Bautista and eventually cruised to a fifth world championship while the Spaniard’s challenge imploded spectacularly. 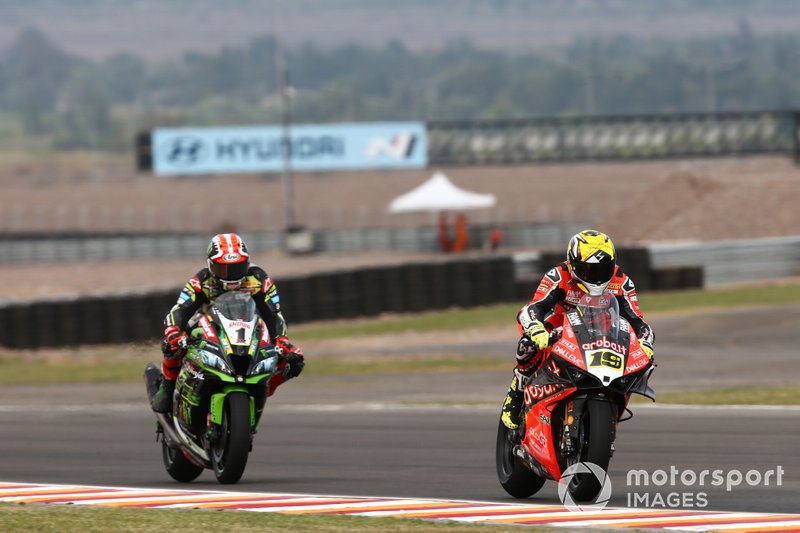 The dynamic this time around feels different. Rea has crashed out of two of the last seven races, on both occasions while battling Razgatlioglu, which is pretty much unprecedented in the Rea/Kawasaki era. In the Superpole race at Most Rea also went straight on at Turn 1 while in pursuit of Razgatlioglu, probably costing himself second place and another five precious points.

Part of that is down to the machinery. Kawasaki brought in a heavily-updated ZX-10RR base model for this year that appeared to be the class of the field in the opening rounds at Aragon and Estoril, but since then the bike appears to have stagnated somewhat while the marque’s rivals, not least Yamaha, have been able to make progress.

It’s not that the bike is slow per se; after all, Rea has been fastest in Superpole in every round so far. It’s more the bike’s raceability that appears to be causing headaches for the 34-year-old.

“The 2021 model Kawasaki is for sure a step forward,” summarised Rea at Most. “We have some good strengths as well. The bike is stable on the brakes, we have a lot of mechanical traction. When we’re not in traffic we can be fast. I feel good with the bike, with the chassis, but we are not making the same steps as our rivals.”

Perhaps a more reliable barometer for the Kawasaki’s true performance level is Rea’s factory teammate Alex Lowes, who has appeared on the podium just once since the opening round of the season and failed to finish higher than sixth at either Assen – where Rea’s sheer brilliance appeared to make up for his machine’s deficiencies – or at Most. 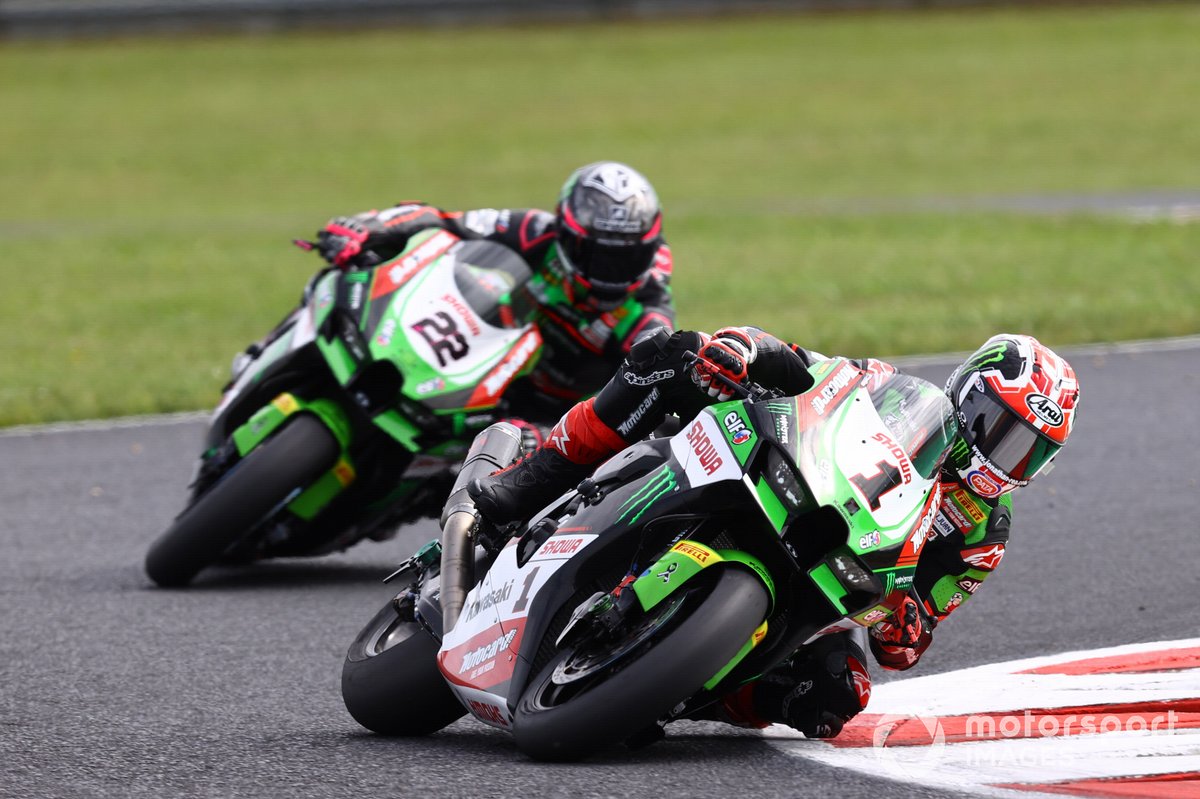 Then there’s the thorny issue of what is in Rea’s opinion an unfairly harsh rev limit imposed on the ZX-10RR at the start of the season, something he was vocal about at Aragon.

“Sometimes I feel for Kawasaki,” he reiterated. “They pushed hard to bring a new bike, which is not easy with the economic situation, and the FIM see this is not a significant enough change. so they penalise us again. We have the lowest-revving bike by far.

“We can compete in the factory team because we have a great team, but imagine being a Kawasaki customer team. It’s hard to compete near the front [for independent teams in general] but then you get this penalty. We have a better weapon [than last year] and it could be even better, but unfortunately the regulations don’t allow that.”

“I’m a bit frustrated with our starts to be honest,” Rea admitted. “Last year I could often make the holeshot, even from the second row, but this year the Yamaha is super-fast in first- and second-gear acceleration, and the Ducati has the power. So if we have a long straight into Turn 1, I have no chance."

He added that working on improving starts is “top of the agenda” for a two-day test Kawasaki has planned for Thursday and Friday at the Circuit de Barcelona-Catalunya. 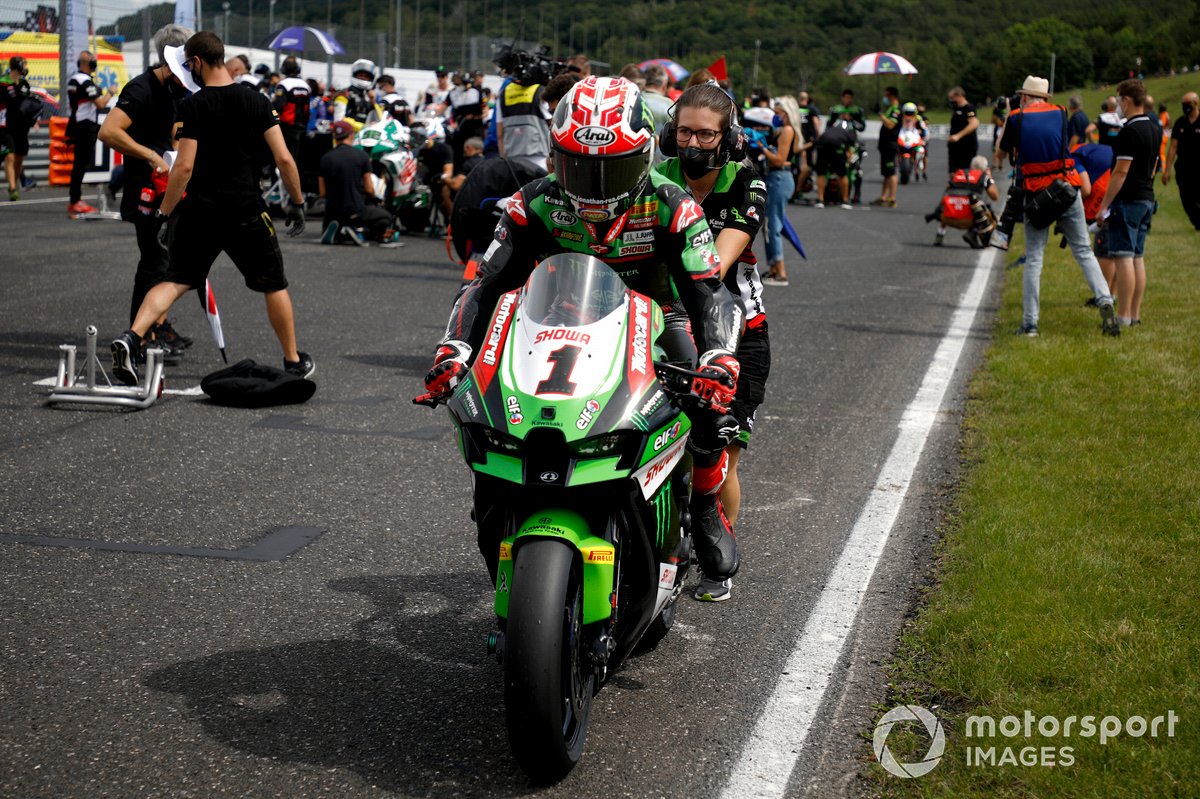 Whatever happens over the remainder of the season, 2021 will be remembered as the year that the traditional Kawasaki-Ducati duopoly in WSBK was finally blown open. While Razgatlioglu showed flashes of promise in his first season on a Yamaha last year, notably winning at Phillip Island and Estoril, elsewhere the R1 lacked consistency.

Clearly, that’s no longer the case – and that’s to say nothing of the steps made by Razgatlioglu himself, who in his fourth season at this level has matured into a rider capable not just of springing the odd surprise but of challenging for wins everywhere.

His angry reaction to Gerloff eliminating him at Assen, and his tough last-lap pass on Redding for victory in last weekend’s first race at Most, tells you all you need to know about the 24-year-old’s burning desire to become only Yamaha’s second WSBK champion after 2009 title-winner Ben Spies.

The bad news for Rea is that Razgatlioglu has committed to staying in World Superbike with Yamaha for another two years, so even if the Kawasaki man finds a way to make it seven titles in a row, the battle is set to rage on between the pair into next season and beyond.

On current evidence, the fight between Rea and Razgatlioglu looks set to go down to the wire. Excluding the anomaly of 2019, the smallest points buffer Rea has had over the opposition after six rounds since he joined Kawasaki had been the 42-point advantage he held over Chaz Davies in 2016.

Even if the Rea era itself might not quite be over just yet, the days of him winning with the consummate ease WSBK viewers have become used to appear to have finally come to an end. 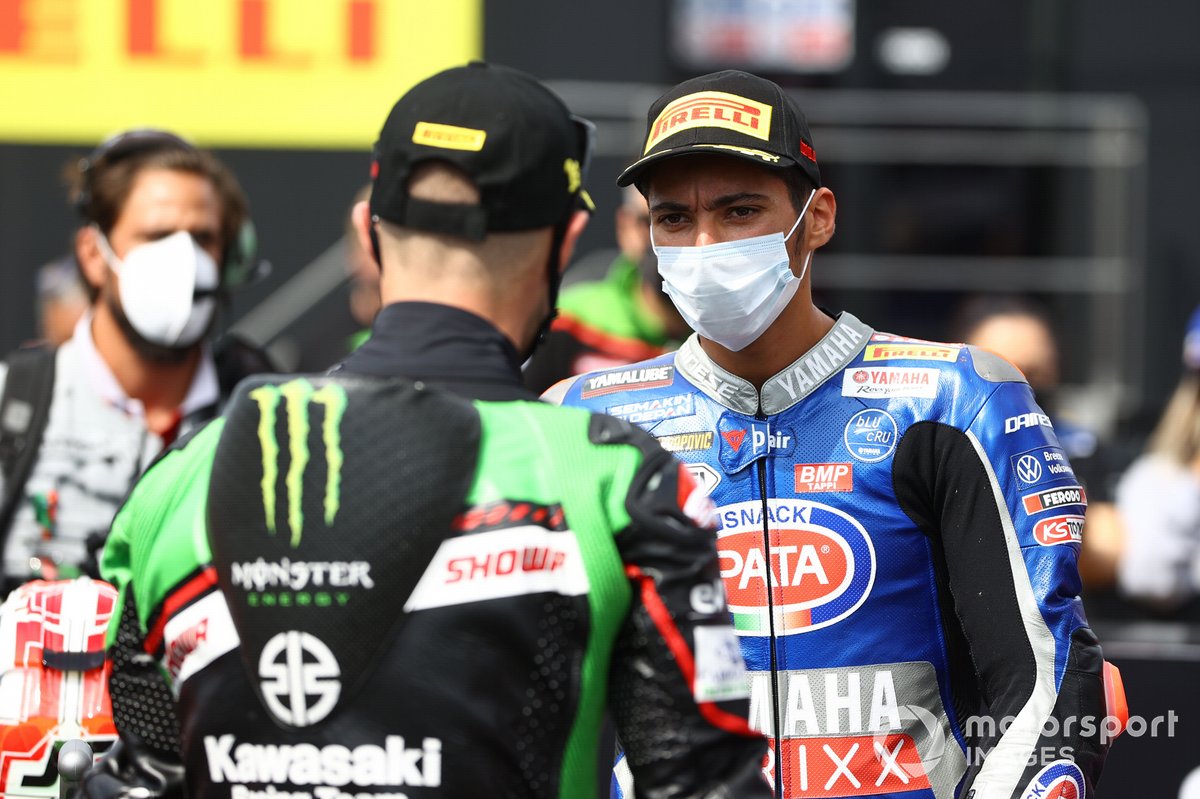 Redding's World Superbike future at Ducati "up in the air"