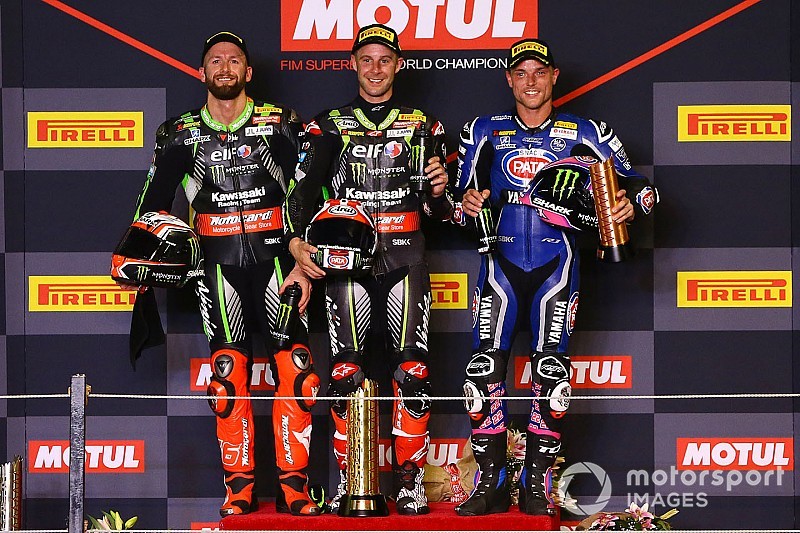 Starting first and second, Rea and Sykes changed positions off the line and the former led the rest of the race, his victory bid never at risk.

Rea quickly built a lead of over a second but didn't pull away further, eventually finishing the race 1.4s from Sykes.

Behind the Kawasaki duo, Lowes and Laverty had a race-long fight for third place.

Laverty was ahead for most of the race as he passed Lowes on the opening lap and later breezed past the Yamaha on the main straight a few laps after Lowes had made a successful move to retake position.

Lowes never let Laverty escape and passed him on the last lap at Turn 4, only for the Milwaukee Aprilia rider to launch a successful counter-attack two corners later.

But Lowes was able to overtake again into Turn 12 and Laverty made a mistake at the final turn, nearly crashing, before settling for fourth.

Xavi Fores kept fellow Ducati rider Marco Melandri at bay for the whole race only to dramatically drop down the order on the last lap, finishing 13th.

Melandri took fifth, with Loris Baz (Althea BMW) charging through the field to sixth - a run that included a pair of overtakes on Chaz Davies (Ducati) and Michael van der Mark (Yamaha) in a single lap.

Davies struggled in the late stages and was passed by van der Mark as well to end up eighth.