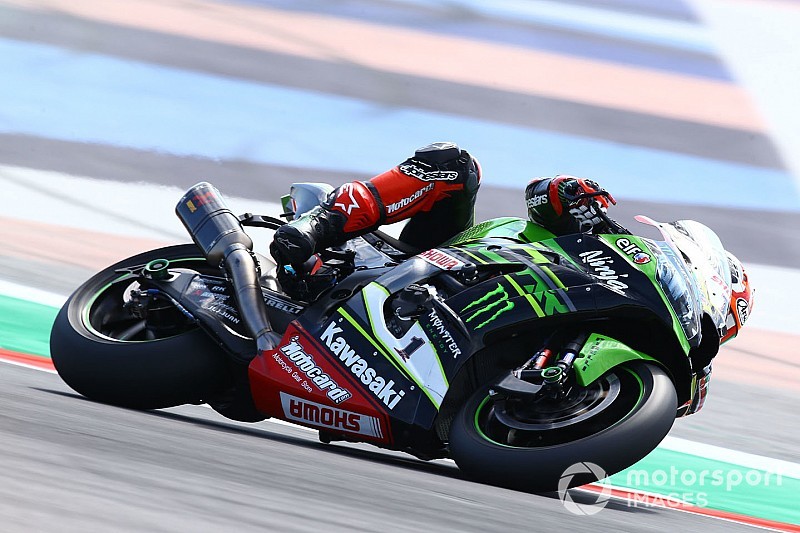 The race was set to start in wet conditions, but big downpour right before the formation lap resulted in the field moving into the pits instead of starting.

After a lengthy pause, pole-sitter Rea kept the lead off the line but a storming start from Lowes ended with him taking the lead at Turn 1 on the second lap.

Lowes and Rea were in a class of their own but the race lasted for only three laps before big rain returned and the red flag was waved again.

Lowes had a sluggish getaway after the second lengthy break and Rea retook the lead, the duo then again rapidly pulling away from the rest.

Unable to quickly make a move this time around, Lowes was all over Rea for several laps but he was finally able to pull off an overtake at Turn 8 on lap 7.

Lowes was able to build a gap from Rea, only to crash two laps later at Turn 11.

Rea then inherited a big lead from Tom Sykes and cruised to the finish to win for the third time this year.

Sykes was closely followed by Chaz Davies, Leon Haslam and Alvaro Bautista early on but in the end he safely secured second.

Haslam also looked set to beat the two Ducatis only to have his race also end in a crash at Turn 8.

His incident was followed by a mistake from Davies, allowing Bautista through, the Spaniard securing third.

Loris Baz also passed Davies to take an impressive fourth in his only fourth race of the season with the Ten Kate Yamaha squad.

Davies settled for fifth with a massive gap to sixth, which was hotly contested among several riders.

Cortese salvaged seventh from second on the grid ahead of Takahashi, the injured Leon Camier's replacement securing the best finish of Honda's wretched season.