Jonathan Rea eased to victory in a wet World Superbike race one at Donington Park to take the championship lead for the first time in 2019, after Alvaro Bautista crashed out. 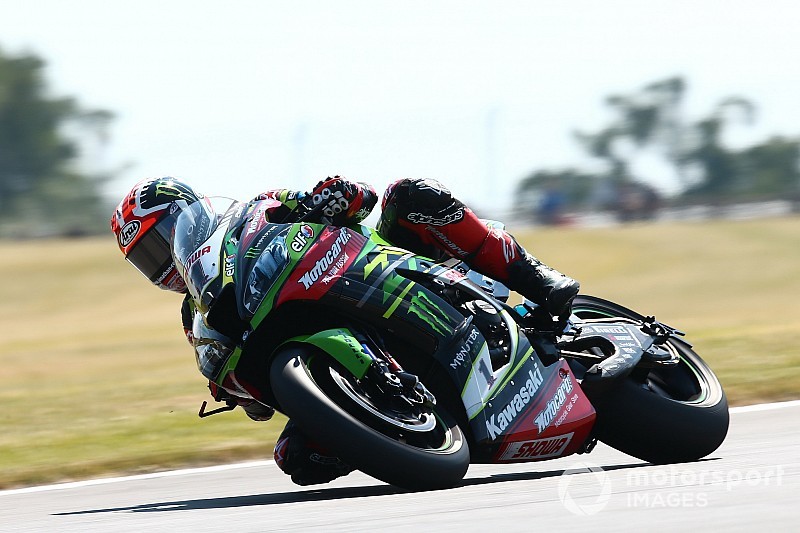 The Kawasaki rider grabbed the holeshot off the line, and proved imperious in the tricky conditions to dominate by over 11 seconds to claim his eight win of the season.

Poleman Tom Sykes and Rea drew level as they entered the first corner at the start, with the Kawasaki man moving ahead while his teammate Leon Haslam slotted into third.

Rea quickly established a lead of 2.8s by the end of the first tour, while Ten Kate Yamaha's Loris Baz seized third from Haslam at the Melbourne Loop on lap two.

Sykes came under intense pressure from Baz and Haslam over the next few laps, while Rea's lead extended to close to seven seconds by the end of the fifth tour.

Haslam found a way through on Baz on lap six at McLeans on lap six, with Sykes gradually beginning to ease away in second place on the BMW.

Bautista made no inroads on his qualifying position of fifth on the Ducati in the opening laps, and would dramatically crash out of a third feature race in as many rounds at Starkey's on the 11th tour.

Rea's lead over Sykes had stalled at just under seven seconds, but he was able to extend it in the closing stages to over nine seconds, with the BMW rider similarly taking 10 seconds out of third-placed Haslam.

Easing off on the last lap, Rea cruised across the line to seal victory and open up an eight-point lead over Bautista in the championship standings.

Sykes added a second podium to his and BMW's haul in 2019 aboard the brand-new S1000RR in second, while Haslam completed an all British podium at Donington in third.

Baz took the chequered flag in fourth ahead of Yamaha stablemate Alex Lowes on the Crescent R1, with Leandro Mercado guiding his Orelac Kawasaki to a season-best sixth.

BMW stand-in Peter Hickman was a lonely seventh in his first WSBK race since 2012, with Michael van der Mark seven seconds adrift in eighth on the sister works Yamaha.

Alessandro Delbianco survived a massive moment at the Craner Curves early on to pass Ducati's Chaz Davies in the closing stages to claim a career-best ninth on the Althea Honda.

An early challenger for the top eight, Toprak Razgatlioglu (Puccetti Kawasaki) plummeted down the order to 13th, ahead of a lapped Marco Melandri on the GRT Yamaha.

As well as Bautista, Pedercini's Jordi Torres and GRT's Sandro Cortese also crashed out of the first race of the UK round.

Bautista: Crash caused by riding too fast with "s*** feeling"