Reigning British Superbike champion and ex-MotoGP racer Redding finished in third place in each of the three races at Phillip Island on his first weekend in WSBK.

The Briton replaces Alvaro Bautista - now a Honda rider - inside Ducati's factory line-up this year, and at the same track last year the Spaniard kicked off his WSBK tenure with a clean sweep of wins, going on to win the first 11 races of the campaign.

But Redding feels that his larger size in comparison to Bautista and the effect this has on the V4 R's top speed means that he shouldn't be compared to his predecessor.

"It's good to start the season like that," said Redding. "I think there was a lot of expectation for me to be at the sharp end and I think we showed we were there.

"The only thing is that compared to Alvaro last year, I'm not as small and as light as him. So I don't have that top speed advantage. I can't really even pass the Kawasakis so I am struggling for my size a little bit.

"I need to work a bit harder in the corners, which is ok, but in this track I was using the tyre too much. It's not the first time it's happened in my career, being big like this.

"But I look forward to moving on to the next races. I feel confident now. I think everyone in the team has had that first race, everyone relaxes, they believe in me now."

Redding, now second in the points behind Kawasaki rider Alex Lowes, admitted that his strategy of trying to pass his rivals on Phillip Island's main straight didn't work out.

"My strategy was a little bit wrong," he said "I was planning to overtake on the start/finish straight, especially when the Yamahas were there, but they overtake into the last corner and it left me no space to go on the line that I wanted.

"If I had a better use of my tyre, because I was struggling a lot, I could have gone in front and held to the finish line." 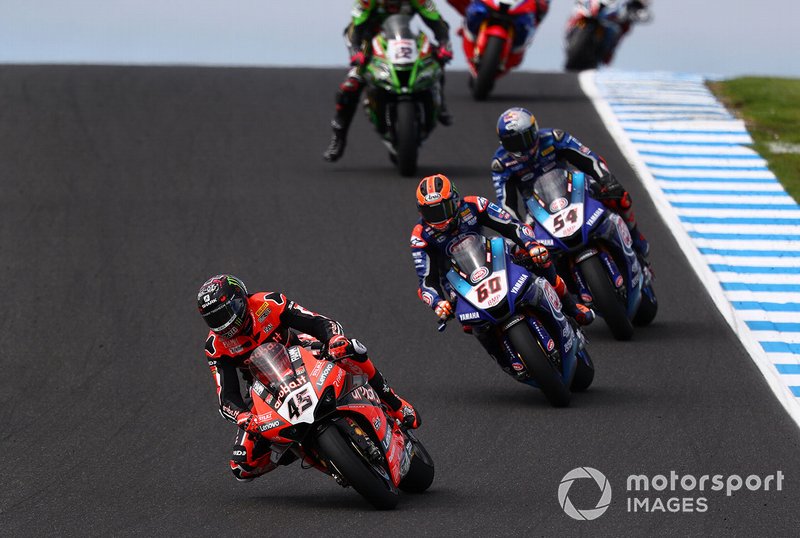 On the other side of the Ducati garage, Chaz Davies endured a much harder time, finishing eighth in Saturday's opener before finishing out of the points in the Superpole Race and then rounding off the weekend with fifth place in the second full-distance race.

The Welsh rider qualified well down in 16th, 1.7 seconds off the pace, and admitted getting the most out of Pirelli's qualifying tyre on Saturday proved a challenge.

"It's been a tough weekend," Davies said. "There's a lot to work on, I'm not super-happy with the result or with the feeling I had around here.

"But nonetheless it was good to finish on a more positive note. In some ways it was an attrition race, I got a little bit lucky with some guys dropping out. But I was at the back of the front group for the majority of the race, so it was definitely a step forward.

"The temperatures probably helped us a little bit, it lowered the pace and changed the race to more of a conservation race. It was definitely a better result than the rest of the weekend."

ByKolles LMH a “better piece of engineering” than LMP1 car

Redding: Mikhalchik not the right choice for BMW substitute