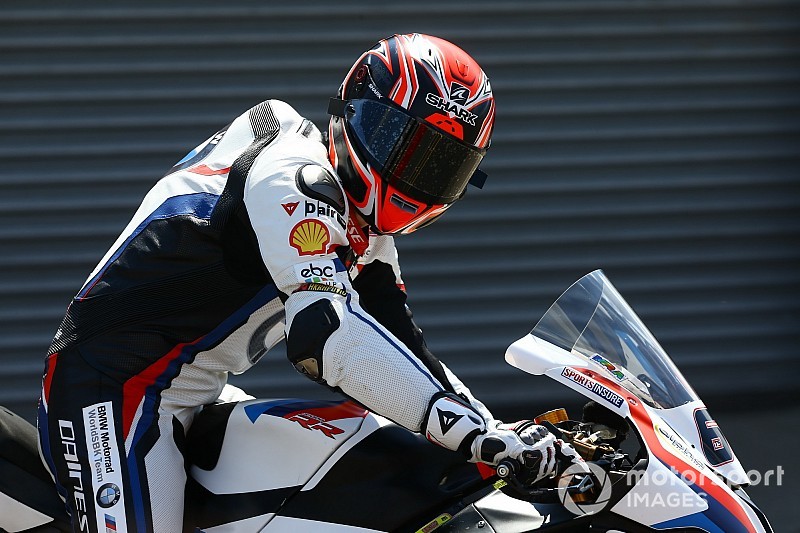 Tom Sykes gave the new BMW its first World Superbike pole position, after dominating Superpole by 0.993 seconds at Donington in a drying session.

Rain this morning left the circuit damp for the start of qualifying, with ever-improving track conditions leading to a manic end to the 25-minute session in which Sykes emerged fastest of all with a lap of 1m27.619s.

Jonathan Rea, who topped the wet FP3 on Saturday morning, set the early pace on the Kawasaki in qualifying with a 1m38.606s, with Alessandro Delbainco chasing him in second.

The Althea Honda rider cut Rea's advantage down to just 0.228 seconds in the early stages, before falling at Coppice, and was soon shuffled back to third as the sister KRT machine of Leon Haslam moved into second.

With just over 10 minutes remaining, Loris Baz dethroned his Yamaha stablemate on the Ten Kate R1 with a 1m37.137s, and improved next time around to a 1m35.441s.

Much of the field started to switch to the intermediate tyres as the session neared its end, with Haslam taking over at the top of the timesheets with a 1m32.615s.

His was beaten by Sykes a few minutes later, before Rea and Lowes – who returned to circuit after his crash on full wets – took turns leading the session.

Former KRT teammates Rea and Sykes continued to traded provisional pole, with the latter asserting his dominance with his penultimate effort of 1m27.822s.

He cemented it with a 1m27.619s on his last lap to secure BMW's first pole of its return WSBK campaign as a works effort, with Sykes claiming his seventh Donington Superpole win.

Baz was dropped to fifth in the end, with championship leader Alvaro Bautista just 0.040s behind in sixth on the Ducati, having gambled on a slick qualifying tyre at the end of the session.

Toprak Razgatlioglu guided the Pucetti Kawasaki to seventh, beating Yamaha’s Alex Lowes – who crashed at Goddards at the start of qualifying - Melandri and the sister factory Ducati of Chaz Davies.

The injured Michael van der Mark (Yamaha) and Delbianco failed to lap within 107 percent of Sykes's laptime, but will likely be granted dispensation to start this afternoon's first feature race from 16th and 17th.