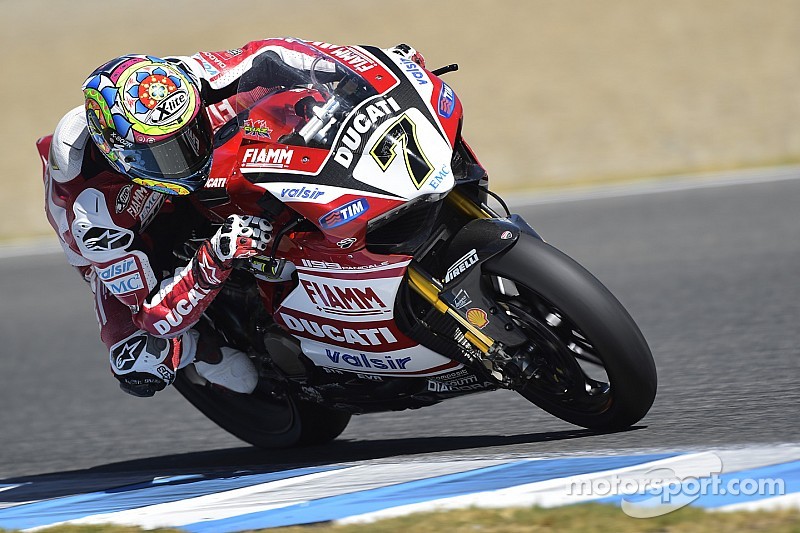 Ducati is in fourth position in the manufacturers’ standings.

Borgo Panigale (Italy) - The Ducati Superbike Team prepares to travel to Qatar, and the Losail International Circuit, for the final round of the 2014 Superbike World Championship, taking place this coming weekend.

The Losail International Circuit, inaugurated in 2004 and located just outside the city of Doha, has hosted both MotoGP and Superbike events over the last decade. The last time the World Superbikes visited the Losail circuit was in 2009, when Ducati rider Noriyuki Haga scored a second place finish in both of the day’s races aboard his Ducati 1198.

Anyway I’m looking forward to getting back on the track after this break and will do my best to conclude the 2014 championship with positive results.

Current factory rider Chaz Davies last raced at the Qatari circuit in 2006 while competing in the 250 world championship, while his teammate Davide Giugliano took part in the 2007 Supersport round at Losail.

At the penultimate round of this year’s Superbike championship, held at the French Circuit de Nevers Magny-Cours three weeks ago, races were conditioned by the wet weather. With many riders suffering crashes throughout race day, each of the Ducati Superbike riders was able to finish one of the races, with Giugliano crossing the line seventh in race 1 and Davies closing race 2 in ninth place.

As the Ducati Superbike Team heads into this final round of the 2014 championship, Davies and Giugliano lie in sixth and eighth position respectively in the rider’s classification. Ducati is in fourth position in the manufacturers’ standings. In a change to previous Superbike events in Qatar, this weekend’s action will take place late in the evening on a floodlit track.

Comments ahead of the event:

Chaz Davies – Ducati Superbike Team #7: “It’s been a few years since I last raced in Qatar. I remember it being a great track and a great facility but it’ll be quite different racing at night I imagine, it should be interesting. I’d like to close the season with the best possible results and so hope to be able to make two good races, despite the long straight that could penalize us. Anyway I’m looking forward to getting back on the track after this break and will do my best to conclude the 2014 championship with positive results.”

Davide Giugliano – Ducati Superbike Team #34: “It’s definitely a great track but I have only raced there once, in 2007, and so I don’t remember it in enormous detail. But it’s going to be a unique experience to race there at night, and I can’t wait to get back to work after the three week break. I head there, as usual, with the intention of giving it my all. The final part of the season hasn’t exactly gone as we expected it to and we haven’t been able to collect the kind of results that we’d hoped for. Having said that, we have been able to constantly improve our performance during practice and qualifying each weekend and so we have some solid experience to put into use this weekend – I hope these final two races can bring us some satisfaction.”