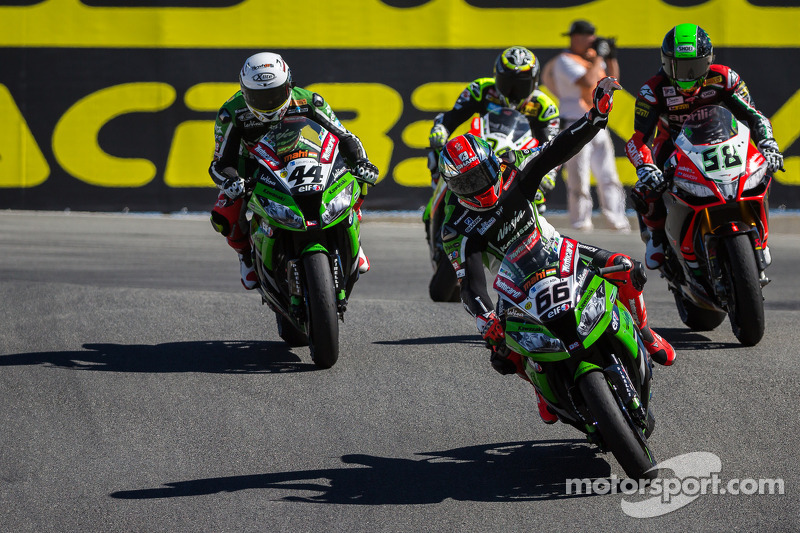 The Championship leader got a perfect start out of pole and steadily pulled away, to place a considerable gap between himself and the chasing duo of Eugene Laverty and Sylvain Guintoli.

Magny-Cours (France) – The French Round of the eni FIM Superbike World Championship proved once again to be a title decider, as the 73,844 attendants could cheer for local rider Sylvain Barrier (BMW Motorrad GoldBet) retaining the STK1000 title and for Sam Lowes (Yakhnich Motorsport Yamaha) clinching his first-ever Championship victory in World Supersport.

The battle for the ultimate prize in World Superbike is still open, despite the resounding double victory scored by Tom Sykes (Kawasaki Racing Team), who holds now 38 points over Eugene Laverty and 39 on Sylvain Guintoli. The factory Aprilia riders completed the podium in both occasions, even after the dramatic finale of Race 2.

With the season finale to be held at Jerez on October 18-20, Sykes further extended his lead in the standings to 37 points over Laverty and 38 on Guintoli.

Race 1: Tom Sykes (Kawasaki Racing Team) has scored victory in the first World Superbike race of the day, leading the way from lights to the Red Flag that was waved during Lap 19, following the crash suffered by Mark Aitchison (Team Pedercini Kawasaki). The Brit was able to pull away from the rest of the field, except for Sylvain Guintoli (Aprilia Racing Team), in the early stages of the race, with the duo able to lap consistently in the 1'38s barrier. Sykes' pace, though, was too fast even for the Frenchman, as the KRT rider managed to put a safe margin between himself and the rival as the race progressed.

Eugene Laverty (Aprilia Racing Team) crossed the line a lonely third to complete the top-3 ahead of Davide Giugliano (Althea Racing Aprilia), very competitive in the opening laps before losing ground from the top, Marco Melandri (BMW Motorrad GoldBet) and Michele Pirro (Team Ducati Alstare), who rode an incredible maiden race in the series to end up 6th.

In the first half of the race Pirro was involved in a spectacular 5-way battle for sixth place, along with Pata Honda duo of Michel Fabrizio and Leon Haslam, Toni Elias (Red Devils Aprilia) and Vincent Philippe (FIXI Crescent Suzuki). Elias, who made his WSBK debut last month in Turkey, lost control of his Aprilia RSV4 at Turn 13 during the sixteenth lap, taking out Philippe in the process. The difficult first race for the FIXI Crescent Suzuki was completed by local rider's Jules Cluzel crash in the early stages, preceded by the fall occurred to works BMW rider Chaz Davies.

The Championship situation after Race 1 sees Tom Sykes extending his advantage to 29 points over Sylvain Guintoli and 32 on Eugene Laverty.

Race 2: Tom Sykes made a clean sweep of the French Round thanks to a dominant win in Race 2, that completes the third double-victory for the Kawasaki Racing Team rider this year. The Championship leader got a perfect start out of pole and steadily pulled away, to place a considerable gap between himself and the chasing duo of Eugene Laverty and Sylvain Guintoli.

As slight drizzle started to fall on the French circuit, the factory Aprilia riders was battling hard for second place, when both crashed on their own at Turn 5 causing a Red Flag situation, that led to an early end of the race. Laverty and Guintoli successfully made it back to the pits and, as final results were based on the last lap completed by all riders - the 21st - they finished second and third respectively.

Technical problems ruled Pata Honda riders Leon Haslam and Michel Fabrizio out of the race, while Jules Cluzel (FIXI Crescent Suzuki) was able to jump back on his GSX-R, after a crash on Lap 13, to finish fourteenth. With the season finale to be held at Jerez on October 18-20, Sykes further extended his lead in the standings to 37 points over Laverty and 38 on Guintoli.

Tom Sykes: “It is great to score a double win here. We made two small changes in the bike to race two, when you are on the edge all the time you have got very small changes that make a big outcome. Magny-Cours was generous to me, the bike and all at Kawasaki, so this was great. It was spitting with rain at the end of race two and that was difficult, but I had a big gap to manage. We still have some work to do but the good thing is that we have been there or thereabouts all season.”

Eugene Laverty: “Tom was on another planet today, I tried to catch him in the early laps but he was pulling away out of slow turns. I battled with Sylvain in the end, usually I don't like this type of situations because I respect him and we're still both in contention, but every point can make a difference in this part of the season. I'm happy about the two results, even though our target was to narrow our gap from the leader."


Sam Lowes (Yakhnich Motorsport Yamaha) has clinched his first ever World Title today, after the second place finish achieved in the WSS Race behind winner Kenan Sofuoglu (Mahi Racing Team India Kawasaki). The indomitable 23 year old from Lincoln, Great Britain, rode a superb race with no tactics involved, even though he just needed to finish in the points to be awarded the new World Supersport Champion.

The race was red-flagged during the final lap following the crash suffered by Christian Iddon (ParkinGO MV Agusta Corse), who high-sided while running in third place. The English rider was able to make it back to the pits within the time limit for his maiden podium in series, as final results were based on the previous lap.

Lowes, Sofuoglu and Iddon put up an incredible show for the win, while Fabien Foret (Mahi Racing Team India Kawasaki) took the most out a 5-way fight for fought that also involved Sheridan Morais (Team Go Eleven Kawasaki), Pata Honda riders Michael van der Mark and Lorenzo Zanetti, and Roberto Tamburini (Team Honda Lorini). Zanetti, along with other two riders - Matthieu Lagrive (Intermoto Ponyexpres Kawasaki) and Lee Johnston (PTR Honda) - had a crash on the final lap, but he was only one of the three who successfully rode back, to claim seventh.