Van der Mark: Yamaha "not there yet" despite maiden win 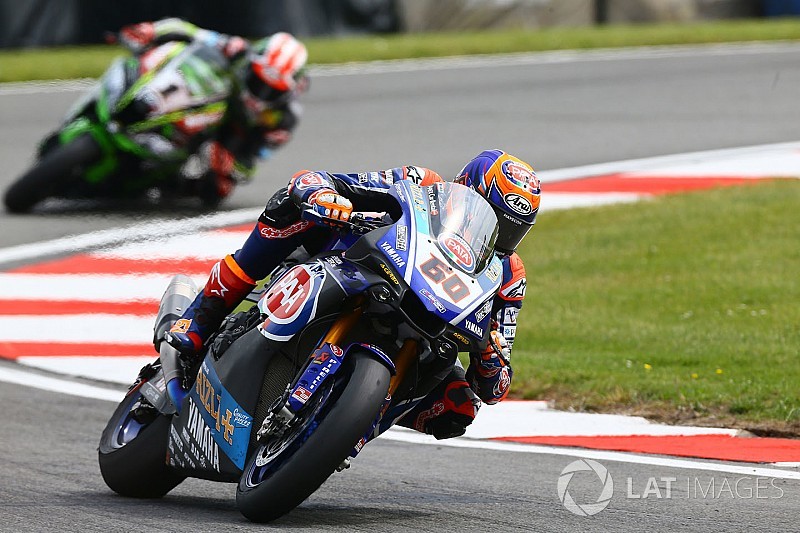 Michael van der Mark says Yamaha is "not there yet" to become a consistent victory contender in World Superbike, despite taking his maiden win at Donington Park on Saturday.

Van der Mark fended off a late charge from Kawasaki's Jonathan Rea in the closing stages of race one at Donington Park to claim his and the Netherlands' first win in WSBK.

It was also Yamaha's first victory since it returned to WSBK in 2016 in collaboration with Crescent Racing, as its previous win was at Portimao in 2011.

While van der Mark believes his victory proved that he can run at the front so long as the bike is at "95 percent", he admitted Yamaha still has work to do to become a consistent victory contender.

"I'm really happy to get my first victory in four years," said van der Mark, who now sits fourth in the standings.

"Also for Yamaha, because they are three years now in this project, we got some podiums where we were lucky, some podiums we really deserved.

“But I think today we showed that if the bike is getting better, we can fight for the victory.

"We're not there yet, but today we showed that when the bike is 95 percent, we can fight for the victory. So I'm really happy."

"I knew [that] if the last few laps were normal, [and I] did a good pace, he [Rea] might come closer but not immediately there.

"I tried to stay calm, I nearly crashed going down the hill. I spoke with Johnny and it upset him as well because I didn't lose any time there.

"Then in the last two laps, I kind of slowed down, but then I went faster again."

Van der Mark's current deal with Crescent Yamaha expires at the end of this season, and the Dutchman – along with teammate Alex Lowes, who was fourth in the race – has been linked with a switch to Kawasaki.

Crescent boss Paul Denning confirmed to Motorsport.com that no discussions had taken place yet with his current riders, but van der Mark reckons his win will improve his market value.

"Oh, yeah, it definitely works I think," he said when asked if the timing of his win is important for his future.

"I think one of the best things is that we take victory now is for Yamaha as well, because they've been winning races in Japan already three years, and now we've finally set this bike up to win here.

"They know they have a great bike, and for them they finally find out how to make it work here.

"For them it's amazing and for me as well, because it's always good when you speak about next year to say you've won here."