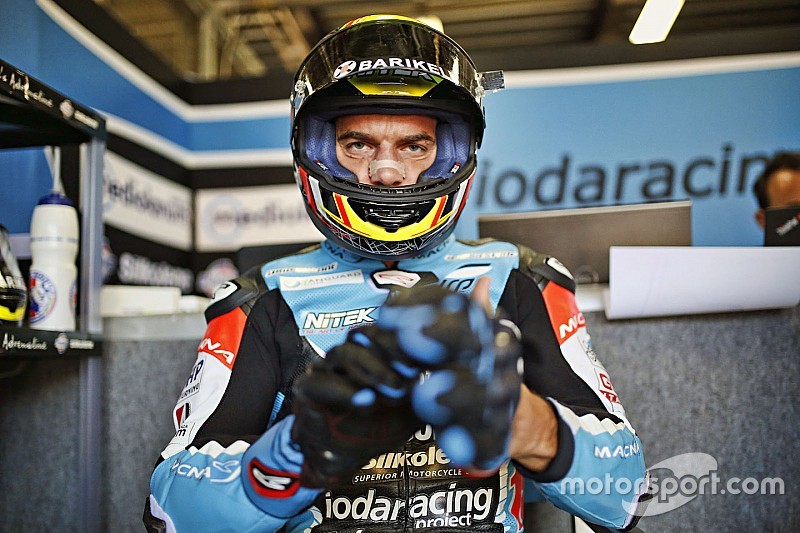 The Ioda MotoGP team has completed a deal to switch to World Superbikes in 2016, with Alex de Angelis appearing on the provisional entry list for the Italian outfit.

Giampiero Sacchi's team will run a pair of Aprilia RSV4s in the production-based series, ensuring the Noale-based firm remains represented on the World Superbike grid.

It marks an end to four-season stint in MotoGP for Ioda, which first joined Grand Prix racing's premier class as a Claiming Rule Team entry in 2012 with Danilo Petrucci as its sole rider.

Petrucci took the team's best ever result of eighth in that year's rain-soaked Valencia race.

Ioda switched to the Aprilia RSV4-derived ART machine in 2014, but the arrival of customer machinery from Yamaha, Honda and Ducati in the rebadged 'Open' class rendered it uncompetitive.

It persevered with de Angelis in 2015, the Sammarinese rider scoring two points before his season was ended prematurely by a violent crash during practice for the Japanese Grand Prix at Motegi.

The 31-year-old however has since recovered, and will make his World Superbike debut this month at Phillip Island after 16 successive seasons in the Grand Prix paddock that yielded four wins, all in the 250cc/Moto2 class.

His teammate will be 22-year-old Italian rider Lorenzo Savadori, the reigning champion in the Superstock 1000 class.

The arrival of Ioda in World Superbikes bolsters the total entry to 24 bikes, while reducing the size of the MotoGP grid to just 21 - its lowest level since 2012.

Sykes buoyed by Jerez test: “Now I can race the bike again”