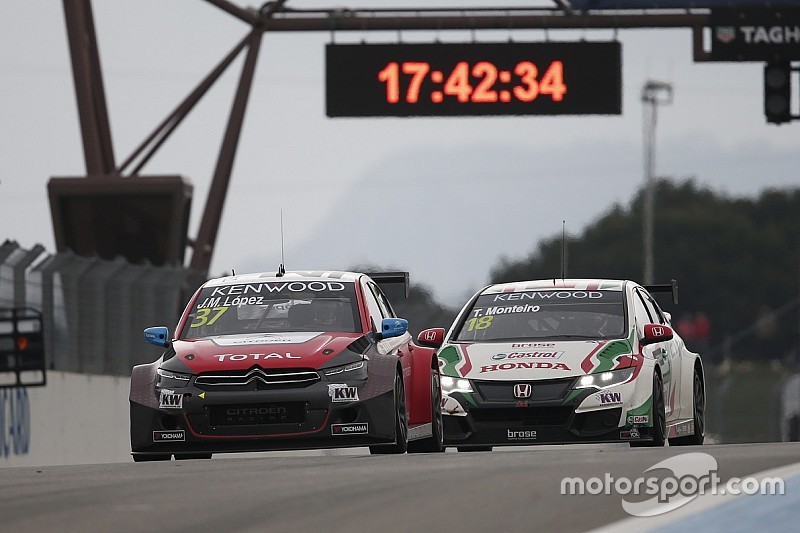 In the opening meeting of the 2016 FIA World Touring Car Championship, the Citroën Total team has proved it remains the team to beat.

Despite the 80kg of ballast the Citroën C-Elysée WTCCs were required to carry, José María López won the main race and leaves the Paul Ricard circuit at the top of the World Championship standings.

There may have been grey clouds building up ominously in the Provence skies, but the weather was dry when the cars came out for the opening race. The reverse starting grid meant Yvan Muller and José María López were placed 8th and 10th respectively.

Having decided to preserve their Citroën C-Elysée WTCCs for the main race, the Citroën Total driver stayed out of the rough and tumble of the first lap, which they completed in 8th and 11th place. But Yvan was soon handed a ‘drive through’ for a false start. Once he had served that penalty, the man from Alsace re-joined the race at the back of the pack.

My tyres were about as worn as they can get, and it wasn’t easy to stay in front.

Having overtaken Tarquini, José María López found himself in ninth. He them climbed three places in the space of just a few hundred metres, taking advantage of the confusion caused by Ekblom’s spinning off to get the better of first Coronel and then Catsburg!

Now in sixth place, the Argentine gained ground on Hugo Valente in the last few laps, but couldn’t find a way past without risking a collision. Thanks to Mehdi Bennani, who produced a remarkable performance to finish second in his Sébastien Loeb Racing Citroën C-Elysée WTCC, Citroën was able to notch up some invaluable points in the Manufacturers’ World Championship.

In late afternoon came the main race, the finale of the weekend’s action. The official Citroën C-Elysée WTCCs got off to a perfect start, with José María López coming out of the first turn in first place and Yvan Muller in second. The Argentine then put his foot down to extend his lead slightly.

Yvan, however, couldn’t shake off Tiago Monteiro. He kept him at bay for seven laps, before being pushed off the track by his rival at the Virage du Pont turn. Norbert Michelisz took advantage to move past, relegating Muller to fourth.

The closing laps saw Tiago Monteiro put pressure on José María López. But despite tyres that were on their last legs – one of the many consequences of carrying 80kg of ballast – the reigning World Champion held firm until the chequered flag to secure his twenty-second FIA WTCC race win.

The result sees José María López take an early lead in the World Championship standings, four points ahead of Monteiro. In the Manufacturers’ standings, meanwhile, Citroën had a successful time, given its unfavourable setup, with the team just one point behind the leader.

The next round takes place in two weeks at the Slovakia Ring (April 15-17).

What they had to say

Yves Matton (Team Principal, Citroën Racing): “Despite a setup designed to penalise the reigning World Championship team, we have proved that the Citroën C-Elysée WTCC remains the best car in the competition. I don’t attribute a lot of importance to the result of the opening race, which is far too artificial to reflect the real pecking order. But the performance of Pechito Lopez in the main race is reward for the efforts put in by the whole team over the winter. It’s hugely satisfying to be on top of the Drivers’ World Championship and with a bit more luck we could also have led the Manufacturers’ standings. It’s going to be a tough weekend in Slovakia, but after that we should be back competing on equal terms with our rivals.”

José María López (Citroën C-Elysée WTCC No. 37): “I took a few risks at the start of the main race and I was happy to find myself out in front, ahead of Yvan. The weight difference with the other cars was just too big, and that’s what allowed Tiago to go past Yvan and gain ground on me. The last few laps were intense. My tyres were about as worn as they can get, and it wasn’t easy to stay in front. I managed to go through Signes quickly, which earned me a bit of breathing space. Once again, a massive ‘well done’ to Citroën! We knew it was going to be difficult, but we leave here with our heads held high and leading the World Championship.”

Yvan Muller (Citroën C-Elysée WTCC No. 68): “Once again, my season didn’t get off to the greatest start despite a promising performance in qualifying. In Race 1, I made a mistake at the start and the penalty was justified. That put me out of the running for the points. In the main race, I got away really well, but I just couldn’t hold off the Hondas, which were 80kg lighter. Tiago Monteiro tried a bold move and ran into me, which cost me two places. It’s a shame, and obviously I’m disappointed to finish only fourth.”