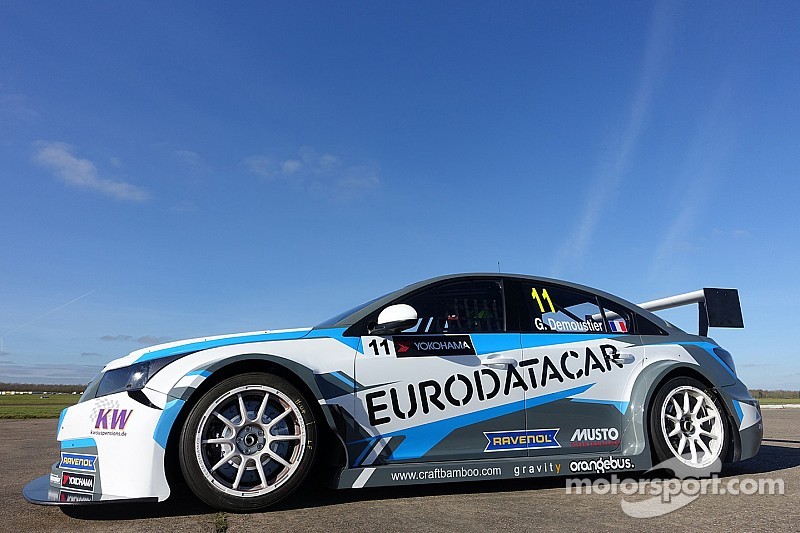 The final preparations have been completed on the #11 car that will be driven by Grégoire Demoustier.

Craft-Bamboo Racing has put the finishing touches on their Eurodatacar-liveried Chevrolet Cruze TC1 that will contest this year’s FIA World Touring Car Championship.

The final preparations have been completed on the #11 car that will be driven by Grégoire Demoustier, who will also be fighting for the Yokohoma Driver’s Trophy. This will be the French driver’s first season competing in the WTCC and with Craft-Bamboo Racing.

I'm proud and excited to drive for Craft-Bamboo Racing which is one of the best touring car teams on the grid.

Earlier this week Demoustier was fitted for his seat and later completed a session in the simulator to prepare for the inaugural race in Argentina. Wednesday’s test at Bruntingthorpe was a success with Demoustier familiarizing himself with the new vehicle and completing over 100 kilometres of trouble free running.

The car will begin its journey by air to Argentina early next week, with the first race of the season being held at the 4.8km long Autodromo de Rio Hondo. This will mark the return of independent champions Craft-Bamboo Racing, who scored a third place overall in the 2013 WTCC season.

Grégoire Demoustier (FRA): “I'm really looking forward to the first season, everything is new for me; the car, the team and the championship. I know it will be hard, but that makes the challenge very exciting and interesting. The goal will be to step up during the season and produce some good results.”

“I think I will need some time to get used to front-wheel drive Cruze, but this will be a competitive car and that is the most important thing. It will make the learning much easier.”

“The first contact with the team has been really good. It seems we have the same vision about racing and especially about how to work hard during the 2015 season. I'm proud and excited to drive for Craft-Bamboo Racing which is one of the best touring car teams on the grid. It has been a very successful team in the past and I think we will be able to continue this success in the future.”

Richard Coleman, CEO of Craft-Bamboo Racing: “The team has worked incredibly hard with our partners to get the car not only ready for Argentina but also to allow enough times to perform some running this week. Nonetheless, the first race will be a challenge with such limited time to prepare but the team has race winning experience at this level and I am confident we can get on top of the car quickly."