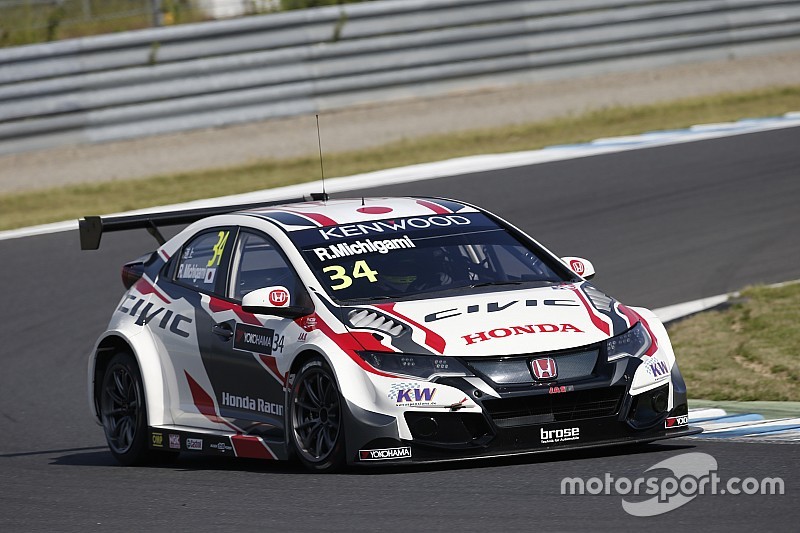 The Honda WTCC team has announced Super GT driver Ryo Michigami as Rob Huff’s replacement in its three-car line-up for 2017.

Huff confirmed his departure from the JAS Motorsport-run squad after a single campaign last Friday, when it was announced he would rejoin Munnich Motorsport – having previously raced with the team in 2013 – in an ex-factory Citroen C-Elysee.

In a statement release after Huff’s exit, Honda said: “We can confirm that the partnership between Castrol Honda World Touring Car Team and Rob Huff had come to an end.

“We would like to thank Rob for his contribution to the team in 2016.

“During the winter of 2015/16, we underwent a significant restructure as part of the plan to increase the competitiveness of the Civic WTCC.

“Undoubtedly, this was successful, as proven by Rob’s Honda debut win at Circuit Paul Ricard and the performances that he, Tiago Monteiro and Norbert Michelisz produced over the season.

“Unfortunately, it has not been possible to extend the partnership with Rob into 2017 and we would like to wish him the very best of luck for the rest of his career.”

Honda announced on Monday that the Briton’s seat would be taken by Michigami for 2017, who will race alongside Tiago Monteiro and Norbert Michelisz – both of whom have been retained – in a continued three-car assault by the manufacturer.

Japanese Michigami, who founded and ran the Drago Corse Super GT squad before it ended its racing activities at the end of last season, has been part of the Honda Racing stable since 1998.

He contested the Motegi round of the 2016 WTCC season in a one-off appearance in a fourth factory Civic, recording a best finish of 11th in the opening race.

Michigami will join Monteiro and Michelisz in a three-day test at Aragon from Wednesday to Friday.

“As a Japanese driver, I’m extremely proud to be given the opportunity to represent a Japanese manufacturer in a world championship,” he said.

“I’m aware that this season will be a huge challenge for me, but I will use all the experience I have gained during my career in Japan and I am incredibly motivated to perform strongly across the season.

“I want to make this the pinnacle of my life in motorsport and together with Honda, JAS Motorsport, Tiago and Norbi, I will make the maximum effort possible to achieve this.

“I would also like to thank everybody in advance for their help and support in 2017.”