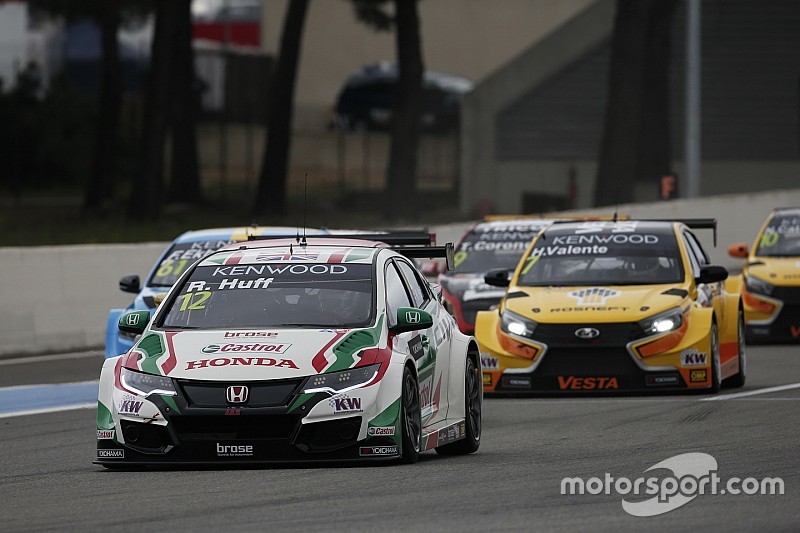 Rob Huff says he believes he is in with a chance of winning the WTCC title after taking victory and a sixth place in the season-opening races at Paul Ricard.

On his Honda WTCC debut, the British driver left France just five points behind Citroen’s Jose Maria Lopez in the drivers' standings, and a point behind teammate Tiago Monteiro.

After winning the opening race, Huff started from ninth in the main race, but was caught out as Gabriele Tarquini collided with Lada teammate Hugo Valente, who in turn pushed Huff, knocking him wide at the first corner.

He eventually recovered from 16th to finish sixth after a succession of passes.

“I thought the car was destroyed [after the contact], because I got hit that hard, and when I’ve been hit that hard in a car in the last few years I’ve been out of the race,” said Huff.

"I had a lot of toe-in on the rear-right, but it probably helped as through all the right-handers it was sliding in beautifully.

“It’s just so nice to be back in a car you can really do something with and race with, and coming back from 16th to sixth is just fantastic,” added the 2012 champion.

After a strong first weekend on Citroen’s home turf, Honda leaves with a one-point lead over the French marque in the manufacturers’ title, but Huff says the drivers’ championship is the target.

“I do think I can win the championship,” said Huff. “I wouldn’t have come to Honda if I didn’t think I had a chance.

"Percentage-wise I’d say it’s more in [Citroen's] favour than it is in ours, but we’ve shown this weekend we’ve got very got three very good drivers in three good cars.

"I think three can overcome two, but whether we can do it all the way through the year and be there at end of the year, who knows."

Lopez wary of the Hondas

Reihning champion Lopez left the opening weekend as the points leader, but the Argentine is expecting things to get harder as the season goes on.

“I’m very happy to win the main race and be first in the championship, there’s a long way to go [still]," he said.

"Especially this year I think it’s much more difficult, but it’s good to start on the right foot."

Lopez was cruising at one stage in the main race ahead of teammate Yvan Muller, but towards the end he came under threat from a fast-charging Monteiro after the Portuguese had overtaken Muller.

“I saw [Monteiro] was very quick off the line in the first race so I had to do a good start,” said Lopez.

“I took a little bit of a risk [at the start of main race], but in the mirror I think maybe he didn’t get it right.

“Yvan was struggling a little bit with the pace [in main race], the heavier car is more difficult in the race. I wasn’t suffering too much at the start.

"I managed to pull away, but when Tiago passed Yvan he came at me like a train. He was a half a second quicker a lap, so I think the most important thing for me was the gap I built at the beginning."