James Nash on the brink 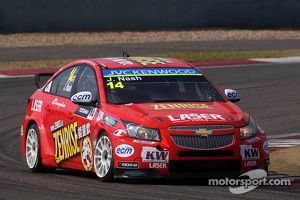 The much-coveted award is the prize awarded to the top driver in the WTCC racing without major support from a manufacturer and Nash should he win, would become the first British driver ever to win the award and which would sit nicely on his CV with the similar award he won in the British Touring Car Championship (BTCC) in 2011.

In addition to trying to secure the Independent World title within the high-pressure environment of a street circuit where drivers fight to keep their cars away from the barriers lining the track, Nash has his eyes on another prize too. A top three in the overall championship standings.

The Bamboo Engineering Chevrolet Cruze driver is currently fourth in the standings but with just 29 points covering three drivers, Gabriele Tarquini (Honda Civic), Tom Chilton (RML Chevrolet Cruze) and Nash and a potential haul of 55 points still available, it is clear that Nash has a fighting chance of grabbing a championship podium spot, an opportunity he’s determined not to let slip.

James Nash: “ I’m really looking forward to racing again on the streets of Macau. The Macau Grand Prix meeting is one of the sport’s ‘Blue Riband’ events and with this year being the 60th anniversary the atmosphere will be extra-special.”

“Since Shanghai nearly two weeks ago I’ve been lucky enough to have spent time in Bali relaxing with the Bamboo Engineering guys. My batteries are recharged, I’ve remained on the Asian time zone and by staying out in the Far East I’ve saved myself two long haul flights, which are always killers. I feel fresh and I’m ready for action.”

“The fight for a top three overall is still on and that is what my focus will be on. Gabriele is probably too far from me now but Tom in third is only seven points away. I think too that Alex MacDowall, my team-mate and my only challenger now for the Independent crown has to win both races and set fastest lap in each if he is to deny me the Independent world title so that looks reasonably good from my point of view.

‘The weather is a bit of a worry. Last week for the national (Chinese) touring car event and Porsche race that opened the 60th Anniversary celebrations I understand that it rained pretty hard. It is still raining in Macau now and the current forecast for the WTCC race weekend is for more of the same. Any track is trickier in the wet, though this is especially true for an every day street circuit with its built in hazards of crowns, gullies and lines. I’d prefer it to be dry but of course, whatever the conditions turn out to be it’ll be the same for all of us.”

More weight for BMW and SEAT cars at season finale