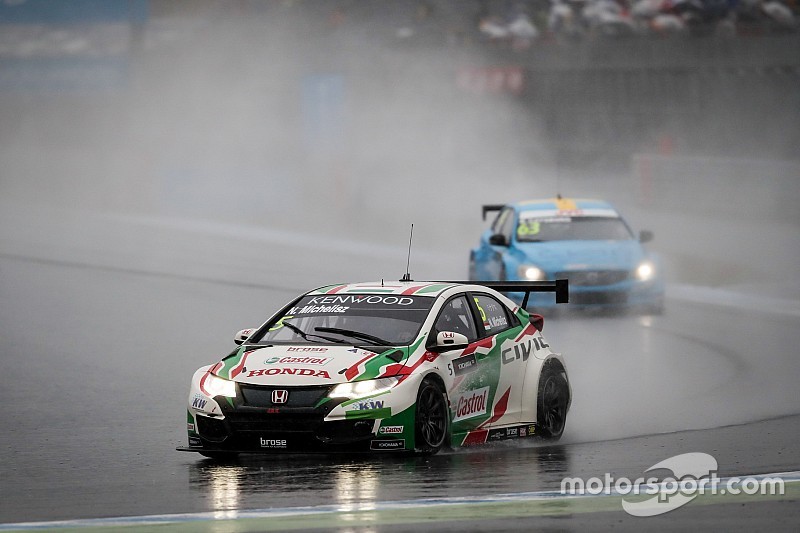 Honda's Norbert Michelisz was declared winner of the second WTCC race at Motegi, which was suspended early after increasingly heavy rain.

The race was the second in as many rounds to be ended early, with the second race at the Ningbo circuit in China a fortnight ago also called off due to heavy rainfall.

Unlike in China, however, cars were allowed to race after an initial two laps behind the safety car and during that spell Michelisz eked out a small advantage over the Volvo of Nicky Catsburg.

A total of four green flag laps were completed before the safety car returned to the track on lap seven as the rain intensified, with polesitter Michelisz leading the following snake of cars in his Honda.

The race was formally stopped on lap 11 of an extended 15-lap schedule, with the countback result taking in the first nine laps.

That allowed full points to be awarded, meaning Michelisz moves into second place in the championship, 16.5 points behind Thed Bjork.

Volvo driver Bjork completed one of just a handful of overtakes during the green flag running, eventually getting the better of Ryo Michigami's factory Civic after a squabble along the start/finish straight.

Michigami then squirmed off at Turn 9 and beached himself in the gravel, before being dug out.

The Japanese driver returned to the pits after recovering to the circuit, and was the weekend's only retiree.

Catsburg and teammate Nestor Girolami completed the podium in their Volvos, while Esteban Guerrieri backed up his third place finish in the opening race with a fourth to complete a strong weekend as stand-in for Tiago Monteiro.

Bjork was classified fifth ahead of the leading Citroen of Mehdi Bennani and the RC Motorsport Ladas of Yann Ehrlacher and Kevin Gleason.

Monteiro to miss Macau WTCC round too