Muller and Monteiro at odds on race two clash​​ 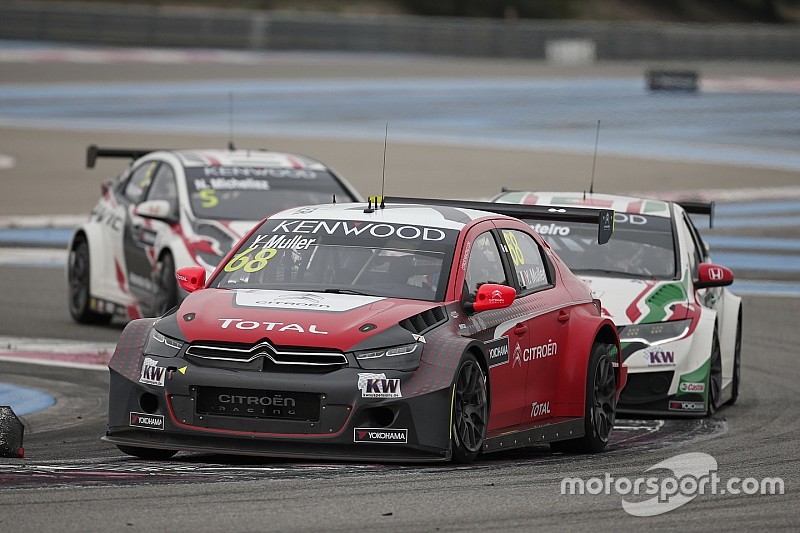 Tiago Monteiro and Yvan Muller tussled for second position in the main WTCC race at Paul Ricard​ last weekend, leading to a clash that demoted the Frenchman outside the podium.

Midway in the race, Monteiro made contact with Muller at the last turn during their fight for second, knocking the four-time champion off wide to fourth.

The incident was not deemed worthy of investigation by the stewards, with Monteiro finishing second and teammate Norbert Michelisz third, scoring key points in the manufacturers’ championship - which Honda now leads for the first time since 2013.

“There’s not a lot of places where you can overtake and he was definitely braking very early there,” said Monteiro after the race.

“So I tried [there]; I was almost alongside him, and he saw me and he closed the door, so it was going to be contact.

"I did this overtaking move three times in race one and there was no contact because we leave room for each other.

“So it was one of those things. He probably has his own opinion about it I’m sure, and I have mine…but I’m confident that I didn’t do anything on purpose or anything intentional to put him out,” the Portuguese added.

Muller was philosophical about the incident, declaring that with Citroen’s exceptional handicap for the first two rounds of 80kg of compensation weight, it was a matter of time before the Honda was able to pass.

“With 80kg, I would be surprised if we’d have been able to keep them behind,” said Muller.

“I did a good start to get ahead of Tiago, then he came back, he was faster especially in the last sector, and the last corner, and I knew that would be the key for him to pass.

"But when you pass there it’s risky, you can’t avoid contact. He tried there, and there was contact and it cost me two places.”

In the same race, Lada's Gabriele Tarquini ploughed into teammate Huge Valente at the first turn at the start, cannoning him into Honda's Rob Huff.

The British driver dropped to 16th, while the Italian was handed a drive-through penalty for the incident, which he accepted the blame for.

“In the second race, the car was almost straight,” said Tarquini. “Unfortunately I made a mistake on the start.

"The start was good, but I was looking out my side and missed my braking point and went very strongly into Hugo, and Hugo went into Rob and Rob, went off, and so I was penalised.”

Tarquini’s first race was also cut short despite a promising start, battling with Lopez during the opening stages before being knocked out of contention.

“I was in the middle of the pack fighting with people,” he said. “I had a good fight with Lopez on the first two laps, I overtook him two times, he overtook me three times.

"The car was very good, I had pace until the seventh lap but then I had this accident.

"Demoustier just went straight into me at the first corner and destroyed my suspension and the doors.”