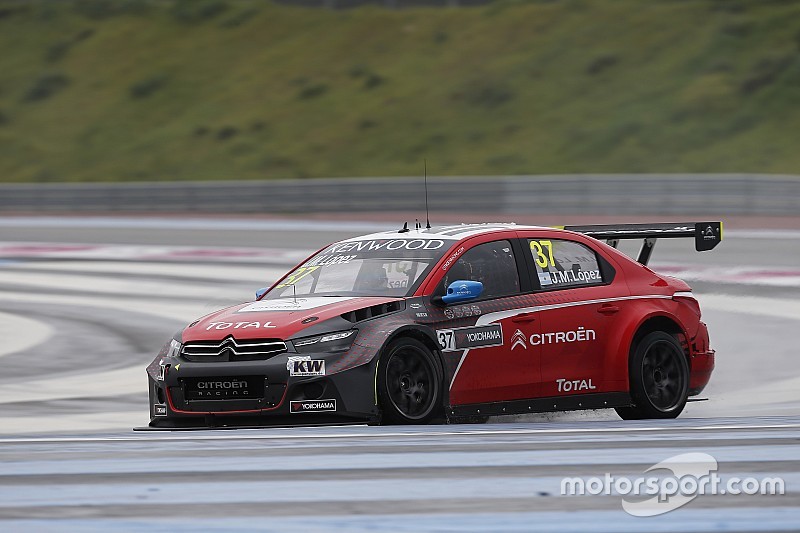 Citroen's Jose Maria Lopez won the second WTCC race of the day at the Paul Ricard circuit, crossing the line just three-tenths of a second clear of the Honda of Tiago Monteiro.

Monteiro had closed in on Lopez in the closing stages, forcing the 2014 and 2015 champion to put up a fight for his first win of the year.

Lopez made the best from pole position and led into Turn 1, while teammate Yvan Muller jumped ahead of Monteiro and into second position, with the two factory Citroen cars running first and second during the early stages.

Tom Coronel, who had qualified fourth in his ROAL Motorsport Chevrolet, stalled at the start, with chaos ensuing into the first corner as Lada’s Gabriele Tarquini hit the rear of teammate Hugo Valente, who had to take avoiding action to avoid Coronel’s stranded Chevrolet.

Valente was knocked in turn into race one winner Rob Huff’s Honda Civic, who was shoved off wide at the first corner and rejoined in 16th and last position.

The race was then one of two battles, both involving the Castrol-backed Hondas, with points-leader Huff trying to regain ground and score as much as possible.

While Monteiro, who was clearly faster than the Citroens ahead of him, was trying to reclaim second and challenge for the win.

Huff had broken back into the top 10 by the end of lap seven, helped with Tarquini’s drive-through penalty for the initial contact at the start of the race, and would work his way all the way up to sixth position by the end of the race, salvaging eight points in the drivers’ championship.

Monteiro fought hard with Muller for second, allowing Lopez to build a gap. The Portuguese made his move at the last corner on lap eight, making contact with Muller’s Citroen, propelling the Frenchman wide out of the corner, with both Monteiro and team-mate Michelisz able to get by into the last two podium spots.

Over the remaining nine laps, Monteiro closed down Lopez’s 3.5 second lead, and was on the Argentine’s tail throughout the last two laps, but was unable to find a way past the reigning champion, and had to settle for second.

Lopez’s win moves him into the lead of the drivers’ standings on 38 points, with Monteiro on 34 and Huff on 33.

Muller is in seventh position with just 15 points after failing to score any points in race one following a jump start penalty.