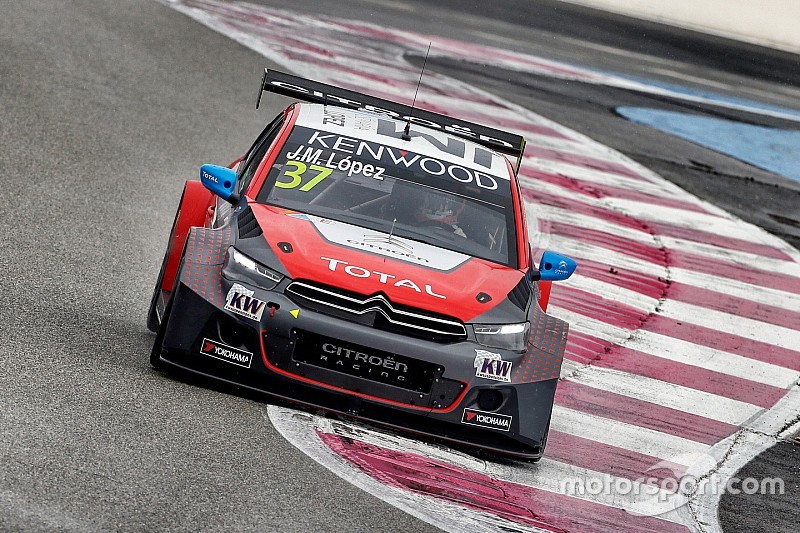 The Citroen driver put in a stunning lap of 1m28.950s in the one-lap shootout to out qualify Honda’s Tiago Monteiro, with team-mate Yvan Muller third.

Lopez made it safely through to Q3 after finishing second fastest in the second part of qualifying, which was headed by Muller.

In the shootout despite producing the best first sector, Muller lost time in sectors two and three and ended up qualifying behind Monteiro, who also set a time underneath the qualifying lap record.

In the first part of qualifying, the biggest names to fall were the two privateer Citroens of Tom Chilton and Gregoire Demoustier.

Norbert Michelisz made a last minute improvement in the factory Honda Civic to demote Chilton out of the top 12, while Volvo’s Thed Bjork set the best time in the session.

The dramatic Q2 session was topped by Lopez while the battle to make the top ten was frenetic, with Honda’s Rob Huff finding himself under threat during the latter part of the session with two cars from his former team Lada Hugo Valente and Gabriele Tarquini 11th and 12th.

Huff found himself with a reprieve after Valente was unable to rejoin the session due to a technical issue.

While a mistake for Tarquini as early as the first corner saw the Italian unable to improve and relegated to 12th, handing Huff pole position for the opening Race with the reversed grid.

Volvo had a strong showing, with Fredrik Ekblom setting the ninth fastest time and therefore securing a front-row spot for the first race, while Bjork set the sixth fastest time overall in his second ever weekend in the championship.

Nicky Catsburg was the best placed Lada, qualifying fifth, but after he missed his pit exit window, he was unable to set a lap.

While ROAL Motorsport’s Tom Coronel put in an impressive performance to set the fourth best time in Q2, but a brake issue in his Q3-run saw the Dutchman limp back to the pit lane.

The opening race, with Huff starting on pole position takes place at 12:15 CET on Sunday, with the main race with Lopez on pole at 17:15.