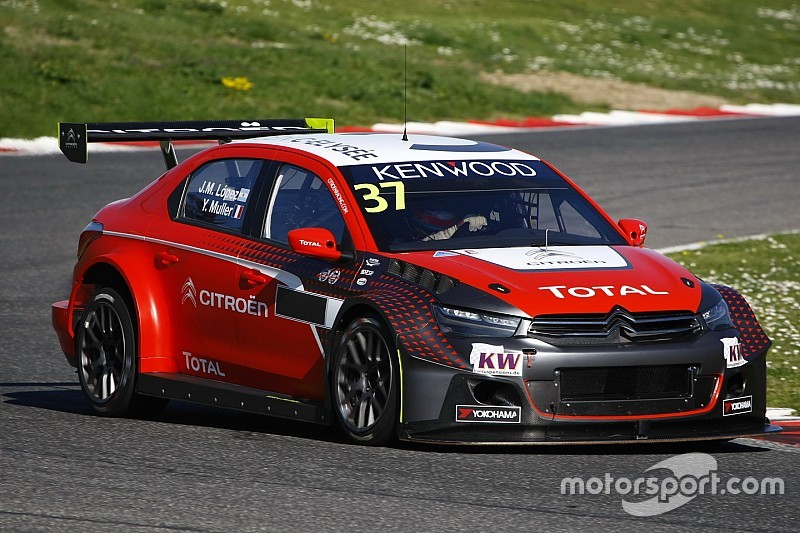 Reigning champion Jose Maria Lopez was fastest of all in the 30-minute WTCC test session on Friday at the Circuit Paul Ricard.

The Citroen Racing driver led teammate Yvan Muller by just under half a second, with Norbert Michelisz, now in a factory-run Honda Civic, their closest threat.

The session started wet and stayed that way throughout, with consistent light rain hitting the circuit in the south of France.

The Citroens were quick to take the lead in the session, with Muller and Lopez setting times in the 1m44s right at the start.

The times behind the two works Citroens swapped hands throughout the session, with Michelisz putting in a last-minute flyer to depose the Sebastien Loeb Racing-run Citroen of Mehdi Bennani, who would be the fastest classified of the independent drivers.

Bennani was just ahead of his new teammate Tom Chilton, while Tom Coronel was the fastest of the Chevrolet RML drivers in sixth, just over a second off of Lopez’s pace.

The new Polestar Volvos struggled in the session, with Fredrik Ekblom the fastest in 14th, while the best placed Lada was that of Nicky Catsburg in seventh.

Only 16 cars took part in the session, with the two Zengo Hondas of Daniel Nagy and Ferenc Ficza sitting out the test.

Zengo forced to pull out of Paul Ricard WTCC opener