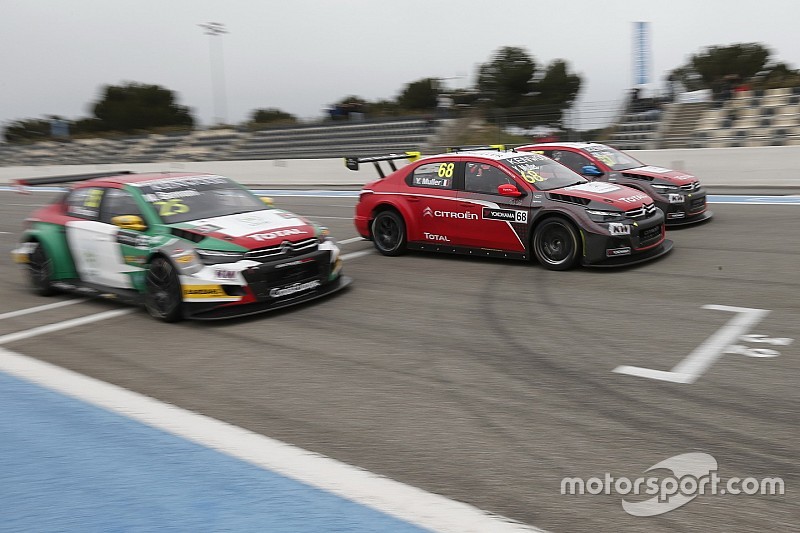 The World Touring Car Championship's new MAC3 time trial concept has been positively received by the teams and drivers in the paddock, with many saying it surpassed their expectations.

The concept of three cars from each manufacturer competing for points is new to motorsport, and was introduced by championship promoter Francois Ribeiro for this year.

WTCC's new MAC3 concept has a successful first showing in France, where Citroen secured an additional 10 points in the manufacturers' standings.

The first event was a dramatic one, with Lada setting a strong time, while on Honda's run, Rob Huff stalled and effectively relegated his team to third behind the Russian marque.

Citroen started its run with good pace, but was slowly dropping back over the two laps, and went on to win by just 0.030 seconds ahead of Lada.

"I think it's OK, I don't think it's stupid, as a driver it was fun to do it," said Citroen's Yvan Muller. "You have to have three good drivers, you have to do a good start and do two good laps, so there's a lot of consistency needed."

Reflecting on Honda's troubled start, JAS Motorsport team principal Alessandro Mariani accepted that the risk of one of the three cars having a poor start was just part of the risk of the format.

"It could happen and it happened," said Mariani. "We did one day testing the MAC3 simulation and we knew immediately the start was the most critical part of the game.

"I like it, because for the TV show I think it was better than we understood at the beginning when they introduced this news to the championship," he added.

Ribeiro, head of Eurosport Events, said the concept received much derision when it was first suggested, but reaction from the teams and initial reaction from the viewers after the first event has been more positive than expected, and if it's a success, it should warrant more points in the manufacturers' championship in 2017.

"I'm happy we did it," said Ribeiro. "I feel there is a decent buy-in from the teams and the drivers…when I introduced the idea in May last year, I was the only believer in it, even my own staff thought I'd drunk a bit too much whisky.

"We really worked with my staff, the manufacturers and the FIA, to work out how to do it, how many points to give it, as the last thing I wanted was to introduce something that we force and go against the nature and half of the paddock is slashing it like Formula 1 qualifying, and that did not happen."

"I looked at social media, and I was really expecting 50 percent to say it was completely stupid and irrelevant and 50 percent would say why not, but I did not feel that 50 percent that negativity.