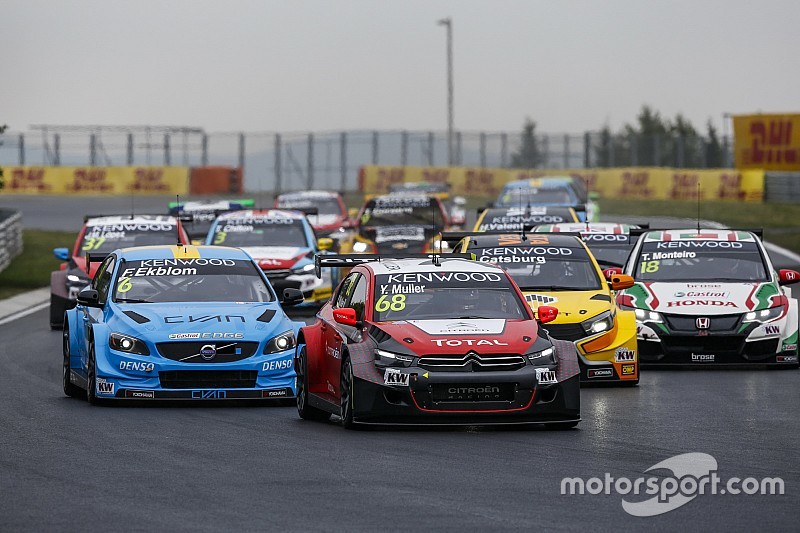 The WTCC is in talks with the FIA and teams to modify the technical regulations of the series, with the aim of reducing costs by around 200,000 euros per season.

The series has a four-manufacturer-strong entry this season with Citroen, Honda, Lada and Volvo, but with Citroen withdrawing at the end of this year, and Honda on a year-by-year commitment, there’s always a risk of a further drop of cars in the future.

With just six privateer cars so far committing to the full season, the championship recognises it needs to support its independent programmes by reducing the cost of the Super 2000 TC1 cars, which will race into their fourth season next year.

“It’s the beginning of a new homologation cycle, and we’re already discussing with the FIA and the teams about cost reduction,” said Francois Ribeiro, head of WTCC promoter Eurosport Events.

“I want to work on two things, the chassis and the engine. I have a very clear idea about what I want and don’t want, but in the end I can only bring an input into the discussion as the technical regulations are the FIA’s responsibility.

"But what I’m doing now is spending time with the manufacturers one-by-one and the teams one-by-one to understand where the cost implications are.

"And what smart things can be done to reduce the costs of some parts of the car without killing the show, the essence of touring cars and without damaging the product we have.”

Ribeiro said he had a key target, looking at the engine leases for the 1.6 turbo powerplants and the design of the cars, with some engine leases known to be over 250,000 euro per season.

“I would like to reduce the running cost for a privateer by 200,000 euros per season, that’s what I would love to achieve,” explained Ribeiro.

“The engine leases are all too expensive, all of them. Citroen, Mugen, RML… the costs of some spares are also too expensive.

“I think we can achieve the same results and change a few things, to make the cars more cost-effective and not change the product at all.”

Ribeiro is collaborating with the FIA and the teams on the new technical regulations as part of a working group, which aims to have a proposal to put to the World Motor Sport Council by June of this year.

Making it sustainable for privateers

The Commission recognises that the key element is to drive costs down for the privateer teams in order to sustain the championship, which just four years ago was down to one manufacturer entry in Chevrolet before TC1 revitalised the category.

“We’ve formed a working group to look at all the avenues we can to bring the costs down, the costs are too great and I don’t think anyone would dispute that,” said FIA Touring Car Commission president Alan Gow.

“The numbers are OK for factory teams, it’s the privateers that’s the issue. If Citroen want to come in and spend that kind of money, that’s fine… it’s the non-factory teams where there’s a problem.

“They can’t sustain that kind of expenditure to run as an independent. I know Francois this year has put a lot more money into the independents to soften the blow.

"But that’s not sustainable, so as far as the Commission goes, we need to look at ways of driving down costs significantly with the independents in mind, but that’ll have the knock-on effect on the manufacturers as well as whatever we do is going to benefit everyone.

The FIA confirms that is it targeting significant cost reduction, with a new chassis built around 450,000 euros at present, and with a season’s budget for the top privateers well in excess of 1 million euros per year.

“Our number one goal at the moment is to drive down the costs very significantly, not just playing around the edges, but very significantly, so that good, strong independent teams can continue to run in the championship and get good results and compete on an equal-ish basis with the manufacturers.

"And you can be led down the garden path and thinking it’s not that bad. You’ve got to listen to the right people.”

Huff calls for introduction of driver steward in WTCC

It's the biggest mystery in all of motorsports...