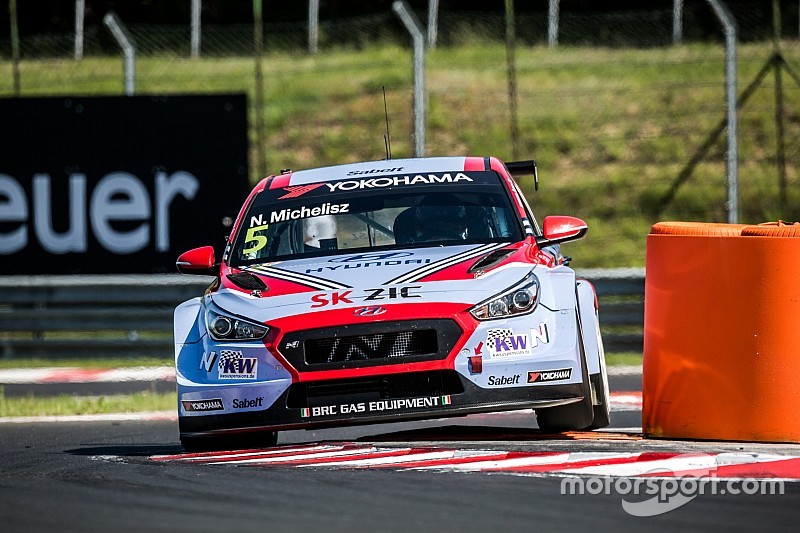 Norbert Michelisz stormed to a second pole position in as many days in qualifying for the second and third World Touring Car Cup races at the Hungaroring.

The Hyundai driver beat the TCR qualifying lap record he set a day earlier with his shootout lap in Q3, and will head a BRC Racing i30 N 1-2 on the grid for Sunday's final race as teammate Gabriele Tarquini qualified second.

Michelisz, who ran last in the shootout segment having set the fastest time in the earlier Q2 session, was 0.073 seconds slower than Tarquini through the first sector of his sole flying lap.

But the home favourite was ahead by the time he had come through the second sector, and his complete lap of 1m52.365s - the best part of three tenths faster than he'd managed in Saturday's race one qualifying session - put him 0.442s clear of Tarquini.

Two of the three Munnich Motorsport Honda Civics will start Sunday's final race from the second row of the grid, with Esteban Guerrieri beating Saturday race winner Yann Ehrlacher to third in the shootout.

Benjamin Lessennes made the final part of qualifying in only his second WTCR race weekend, but did not reach the end of the pitlane in time for his pole position shootout effort and was shown a black flag.

The Boutsen Ginion Honda driver will nevertheless start the final race of the weekend from fifth and, after being demoted from 10th in Saturday's opening race for a clash with James Thompson, scored his first WTCR point for advancing to Q3.

Lessennes' effort in Q2 meant there was no spot in the final part of qualifying for Yvan Muller, who was 0.261s behind the teenager in his YMR Hyundai, while James Thompson was seventh.

Mehdi Bennani was the best of the rest behind the Hyundais and Hondas in eighth in the best of the Sebastien Loeb Racing VW Golfs, with wildcard Attila Tassi taking ninth in his KCMG Honda Civic.

Thed Bjork was the biggest casualty of the first part of qualifying, failing to advance after his fastest time was disallowed for exceeding track limits. He starts 20th for both races.