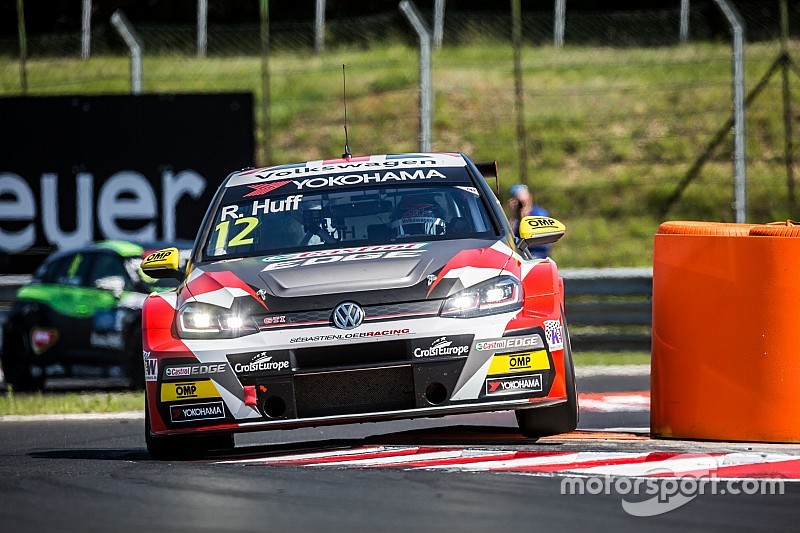 Rob Huff clinched his first victory in the new World Touring Car Cup in the reversed-grid race at the Hungaroring after shaking off a challenge from wildcard Daniel Nagy.

Huff was only promoted to 10th in the qualifying classification - and, as a result, pole for the race - after the session had finished, but the Briton made the most of his opportunity from the front of the grid and led from start to finish.

Having held the lead after the initial launch phase, Huff moved over to the right-hand side of the circuit to cover off Nagy's line on the approach to the Turn 1 hairpin and had enough room on the exit of the corner to ease to the inside approaching Turn 2.

Nagy's mirrors were filled by the similar Hyundai of Yvan Muller on the opening lap, and the Hungarian had to move over quickly to shut off a couple of attempts from Muller, including through the flowing Turns 8 and 9.

But Nagy quickly shook off the attentions of the four-time WTCC champion and was able to edge closer to Huff, particularly at the end of the lap as he hugged a tighter line through the hairpin onto the back straight than Huff could manage.

Despite that, Huff's lead never came under threat and, having built a buffer of half a second back to Nagy, the Sebastien Loeb Racing driver completed the final laps of the race without issue to clinch Volkswagen's first win in World Touring Cars.

Nagy came home a brilliant second and was comfortably clear of Muller, who completed the podium.

The Frenchman had faced pressure from the Munnich Motorsport Honda of Esteban Guerrieri into the closing stages of the 12-lap race, but any threat of an attack fell away when Guerrieri was caught by the BRC Racing Hyundai of Gabriele Tarquini.

Championship leader Tarquini, who caught the leading group after clear Huff's SLR teammate Mehdi Bennani, switched back inside Guerrieri on the approach to the Turn 2 left-hander with three laps to go and eased his Hyundai out wide through the corner, making contact with the Honda as he completed the overtake.

Tarquini ran out of time to catch Muller and crossed the line in fourth with Guerrieri for close company, while the second BRC Hyundai of race three polesitter Norbert Michelisz came home sixth.

Bennani finished ahead of Benjamin Lessennes, who stayed out of trouble to clinch eighth, while David Zsolt Szabo resisted pressure from the WRT Audi of Jean-Karl Vernay to score the Zengo Motorsport Cupra squad's first points of the season.

Guerrieri's Munnich Motorsport teammates Yann Ehrlacher and James Thompson had chances to score point, but Ehrlacher pitted at the end of lap five after reporting power issues over the radio and Thompson dropped down the order at the start of the following lap.