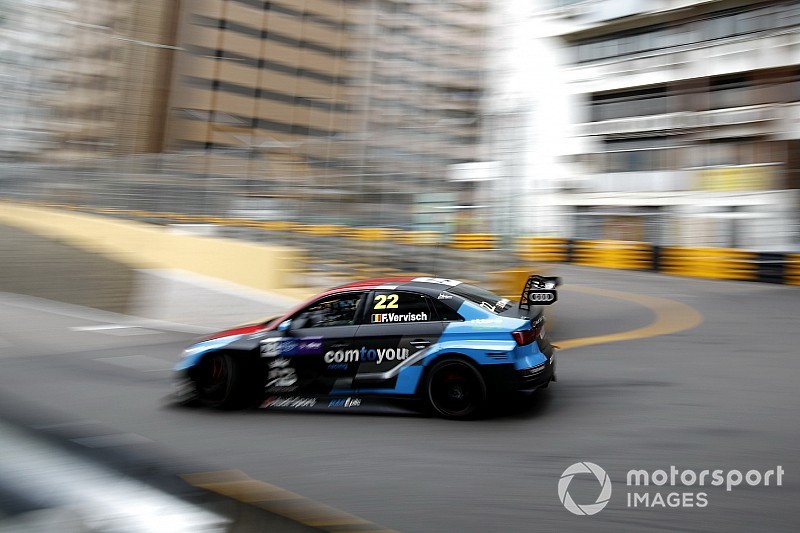 Comtoyou Audi driver Vervisch started from the second row but immediately jumped the Alfa Romeo of Kevin Ceccon, then overtook polesitter Timo Scheider around the outside of the Mandarin kink on lap four to secure the lead.

Once clear of Scheider's Munnich Motorsport Honda, Vervisch ran unchallenged over the remaining four laps to claim his first win of 2018 - becoming the 15th different driver to win a race in the inaugural WTCR season.

While he eased clear in the lead, the real attention was on Muller, who ran fourth in the early laps after escaping an incident at Lisboa on the opening lap that accounted for four cars - including Tarquini.

Starting fifth, Muller immediately jumped the Campos Cupra of Pepe Oriola to run fourth on the approach to Lisboa - where Oriola and Yann Ehrlacher tangled.

Oriola skated along the inside barrier and into the wall on the outside of the corner, avoiding Muller's YMR Hyundai but causing a block that collected for Saturday race winner Jean-Karl Vernay, Tarquini's teammate Norbert Michelisz and Rob Huff.

The subsequent delay also meant Tarquini, on the inside of the corner, received a hit from behind that put him into the back of Muller's teammate Thed Bjork. That caused significant damage to Tarquini's BRC Hyundai, which he recovered to the pits but did not return to the track in.

With every car eventually clearing Lisboa, the intervention of the safety car was not required, and the top four initially ran together - well clear of Munnich pair Ehrlacher and Guerrieri, who were the first cars to escape from the Lisboa blockage.

Muller made his move for third at the same time as Vervisch's overtake for the lead, clearing Ceccon on the run to Lisboa before settling in behind Scheider.

He made four attempts to pass the Honda on the approach to Lisboa, but double DTM champion Scheider stood firm on each occasion, holding off the four-time World Touring Car champion to claim his first WTCR podium since joining halfway through the season.

The 15 points Muller scored for third mean he trails Tarquini by 18 points in the standings ahead of Sunday morning's season finale, and Muller will need to finish at least third to deny Tarquini the title if the Italian - who is 14th on the grid - fails to score.

Behind Ceccon, Guerrieri cleared Ehrlacher - elevating him to fifth in the drivers' standings - and Mehdi Bennani came home seventh in his Sebastien Loeb Racing Volkswagen.