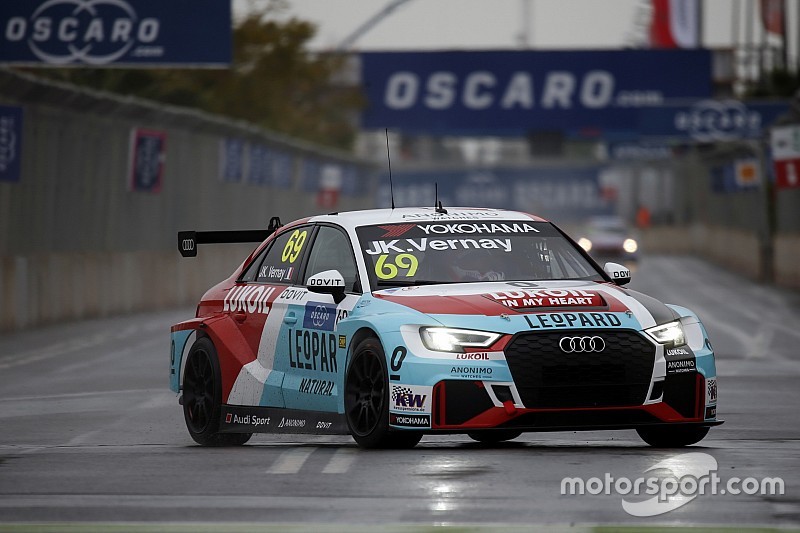 Jean-Karl Vernay cantered to a comfortable win in the the reversed-grid World Touring Car Cup race at Marrakesh from second on the grid, beating home favourite Mehdi Bennani.

Vernay never escaped more than two seconds up the road from Moroccan Bennani, but always appeared in control as he swept to victory in the second race of the new WTCR era.

The 2017 TCR International Series champion grabbed the lead at the start of the race, outdragging polesitter Pepe Oriola on the run to the first corner.

Vernay left room on the inside for Oriola to attempt to squeeze his Cupra back through, sending Vernay wide, but the Audi man held on to his lead as Mehdi Bennani slipped his way into second while Oriola and James Thompson - who lost traction on the inside line - were delayed.

After early pressure from Bennani, Vernay pulled a comfortable early advantage over the Volkswagen and looked in control at the head of the field.

But his lead was wiped out after eight of the original 18 laps when Zsolt David Szabo stalled at the first corner, having turned into the path of the Alfa Romeo of Gianni Morbidelli at the start of the previous lap.

Szabo's Cupra was retrieved quickly and racing resumed two laps later, with Bennani pursuing Vernay closely, before the safety car returned to the track when Benjamin Lessennes stopped at the end of the back straight with his Honda pointing the wrong way.

Vernay made a better getaway on the second restart and quickly established a lead of more than a second over Bennani and, while he did not venture any further clear, maintained a buffer between himself and the Golf over the remaining six laps to win.

Oriola completed the podium behind the leading pair, with Yann Ehrlacher fourth in the leading Honda.

Thed Bjork had been involved in a feisty scrap for fifth with Rob Huff for the majority of the race before Huff ran straight on at the end of the straight approaching the Turn 7 left-right after the second restart.

Huff retired to the pits at the end of the same lap, although it is not clear what the Briton's exact issue was.

Bjork therefore finished fifth in the first of the four Hyundais in the field, with Thompson sixth and Norbert Michelisz registering his first points of the weekend in seventh in his BRC Racing Hyundai i30 N.

Yvan Muller briefly got ahead of Esteban Guerrieri after the second restart, but was repassed with four laps to go and, despite twice drawing alongside the Munnich Motorsport Honda at the Turn 4/5 chicane, remained behind in ninth.

An incident between the two was under investigation as the race finished. Guerrieri twice cut the turn 4/5 chicane to stay ahead of the Hyundai - the second time having been pushed through the looped Turn 3 by Muller.