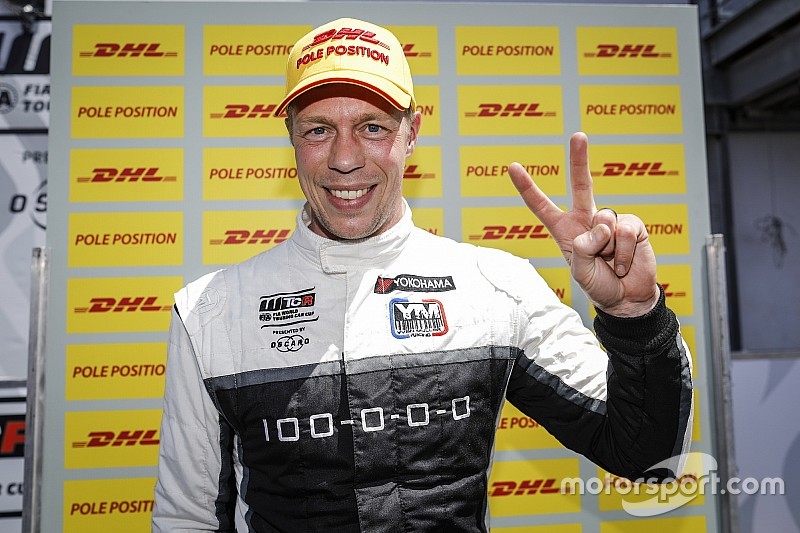 Bjork, the 2017 WTCC champion, set a fastest time of 8m58.700s in his YMR Hyundai to secure top spot by 0.079 seconds from Muller, handing the Swede his second pole of the season.

Norbert Michelisz completed the top three in his BRC Racing Hyundai at the end of the session - although the Hungarian had set the session's fastest first sector on his second flying lap, only to abandon that run after going off in the second sector.

Esteban Guerrieri was the only other driver to get within a second of Bjork's time, hauling his Munnich Motorsport Honda up to fourth after the chequered flag had been shown.

Rob Huff secured fifth in his Sebastien Loeb Racing Volkswagen, setting the fastest fourth sector of all, while wildcard entrant Rene Rast was the leading Audi representative in sixth in his WRT-run Audi.

The fourth Hyundai of Gabriele Tarquini salvaged seventh, qualifying two seconds away from Bjork's time, ahead of WRT regular Gordon Shedden and the two Boutsen Ginion Hondas of Tom Coronel and Benjamin Lessennes.

James Thompson was 26th in his Munnich Motorsport Honda, and slowest of all in his first qualifying session on the Nordschleife.

The Briton will start Thursday's opening race ahead of Zengo Motorsport's David Szabo, who did not take part in qualifying after crashing in the wet in first practice.