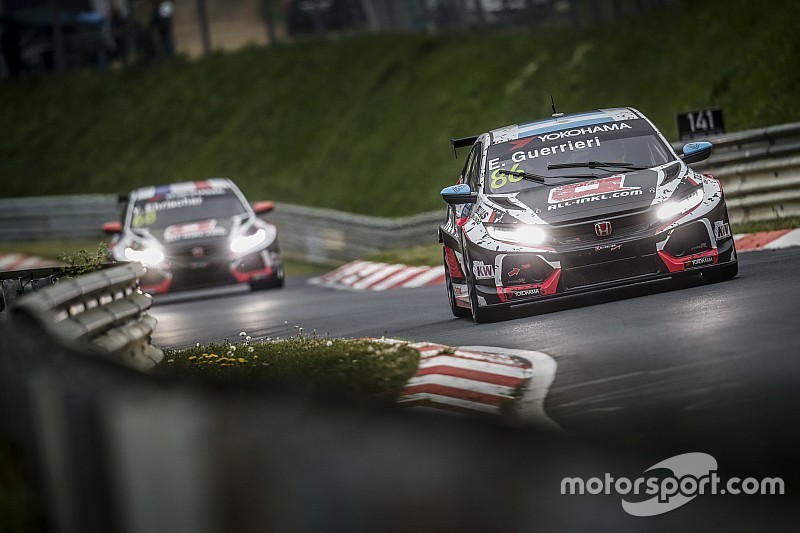 Esteban Guerrieri grabbed his first win of the World Touring Car Cup season in the reversed-grid race at the Nurburgring Nordschleife as championship leader Gabriele Tarquini crashed out.

Honda driver Guerrieri's victory was his first since winning the final race of the World Touring Car Championship era in Qatar last December, and the second of the WTCR season for his Munnich Motorsport team.

Having been the victim of  an incident at the first corner in Thursday's opening race, Guerrieri was well clear of any trouble at the Turn 1/2 complex at the start of Saturday's first race as he leaped past Rene Rast from third on the grid to take second.

Guerrieri had moved past polesitter Oriola by the time Rast was eliminated - the wildcard entrant wiped out when Rob Huff tried to move past the WRT-run Audi on the approach to the Ford Kurve downhill right-hander - and quickly established a buffer from the chasing Campos Racing Cupra as the cars headed onto the Nordschleife.

While Guerrieri was able to stretch his legs, particularly at the back end of the track through the fourth sector of the 15.77-mile circuit, he found himself reeled in by the start of the second and third laps as the chasing pack picked up the tow from his Honda down the long run off Dottinger Hohe.

But the Argentinian still had a comfortable gap back to Oriola, and a strong run through the Nordschleife on the third and final lap ensured he was clear of attack from behind on Dottinger Hohe - winning the race by 1.148 seconds.

Oriola came through to score his second podium finish of the season, while Comtoyou Audi driver Frederic Vervisch backed up his second place in qualifying for the final race by snatching third from Thursday race winner Yvan Muller.

Vervisch had originally got past Muller on Dottinger Hohe at the end of the second lap, but allowed the four-time WTCC champion to sneak back ahead as the frontrunners tackled the Grand Prix circuit for the final time.

But Vervisch kept his RS3 LMS within striking distance of Muller's Hyundai around the Nordschleife, and made a second overtake on Dottinger Hohe on the final lap to secure the final podium position.

Muller hung on to fourth ahead of the BRC Racing Hyundai of Norbert Michelisz, who made his way past Yann Ehrlacher's Munnich Motorsport Honda on Dottinger Hohe, while the two surviving WRT Audis of Jean-Karl Vernay and Gordon Shedden came home seventh and eighth.

Shedden had advanced from 15th to run ninth on the opening lap, but was involved in an incident with Tarquini that took the Hyundai driver out of the race.

Although the start of the incident was not picked up, Shedden appeared to clip Tarquini as he attempted to overtake the Italian in the Nordschleife.

Tarquini hit the barriers on his left-hand side, retiring on the spot as his Hyundai shed its left-rear wheel.

Now level on points with Muller in the drivers' standings, Tarquini is unlikely to be able to start the final race.

Stewards announced the incident between the two cars would be investigated after race three.