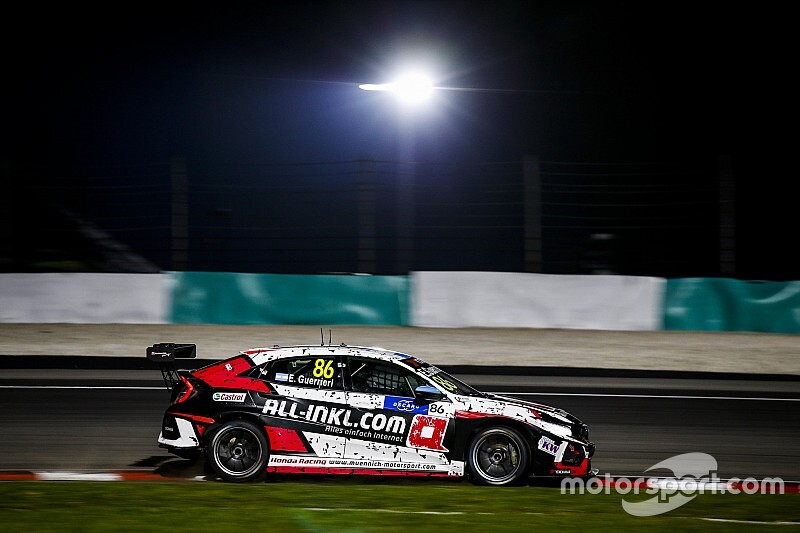 Esteban Guerrieri ensured the World Touring Car Cup title fight will go down to the season finale by claiming a vital win in a heavily disrupted second Sepang race.

The Honda driver dominated the race either side of a red-flag stoppage that lasted more than an hour, first by charging through the pack in his Civic Type R and then by reclaiming the lead from his teammate after the restart to earn his fourth victory of 2019.

Guerrieri had stormed from his ninth-place grid position into the lead before half of the opening lap had been completed, though the race was soon neutralised when Nicky Catsburg's car caught fire.

Four-time world champion Muller, who like Guerrieri had climbed the order, was fourth when he was hit from behind Catsburg's Hyundai.

Catsburg, on slick front tyres, followed Muller's line into the Turn 9 hairpin but then moved for the inside on the approach to the corner and T-boned the Cyan Racing driver's Lynk & Co 03.

Muller - who said he was Catsburg's "target" and had been hit "three corners before" - continued, but Catsburg stopped on the grass runoff on the exit of the corner before a fire emerged from the bonnet of his i30 N.

Though the fire was extinguished and Catsburg's car was recovered, a 56-minute delay ensued before the race was resumed under a safety car.

The order was also taken from the previous sector, which meant Guerrieri took the restart in second behind his teammate Nestor Girolami, with Muller fifth and points leader Michelisz 13th.

Guerrieri took the lead shortly after the race resumed on lap four, with Girolami measuring his pace to ensure his Argentinian compatriot could make a break at the front.

The Munnich Motorsport driver did just that and, even though Girolami was passed by Mikel Azcona's PWR Cupra late on, Guerrieri was more than 10 seconds up the road by that point.

A late safety car, deployed when Attila Tassi stopped his KCMG Honda on track, guaranteed Guerrieri the win, which helped him reduce his arrears in the title race to 10 points.

Girolami finished fourth ahead of the Team Mulsanne Alfa Romeo Giulietta Veloce of Kevin Ceccon, while a sixth-place finish for Muller signalled the end of his title bid.

Michelisz finished eighth - behind Muller's nephew Yann Ehrlacher - after recovering from an off following the initial start.

The Hungarian locked up at the Turn 9 hairpin moments after Catsburg and Muller had collided, though was able to rejoin the circuit after dragging his Hyundai i30 N out of the grass.

He took the restart in 13th, but made up two positions in the opening half of the first racing lap then passed Tiago Monteiro exiting the final corner, despite receiving a hit from the KCMG Honda.

Augusto Farfus then moved over to give Michelisz another position, while the Hungarian also overtook Rob Huff's SLR Volkswagen to complete his recovery.

Michelisz will start the final race from pole, and shares the front row with Guerrieri.

Huff and fellow SLR driver Benjamin Leuchter made it three Volkswagens in the top 10, while the points were completed by Aurelien Panis (Comtoyou Cupra), Monteiro, the fourth VW of Mehdi Bennani and Audi drivers Jean-Karl Vernay and Niels Langeveld.

Ogier opens up on why he decided to quit Citroen