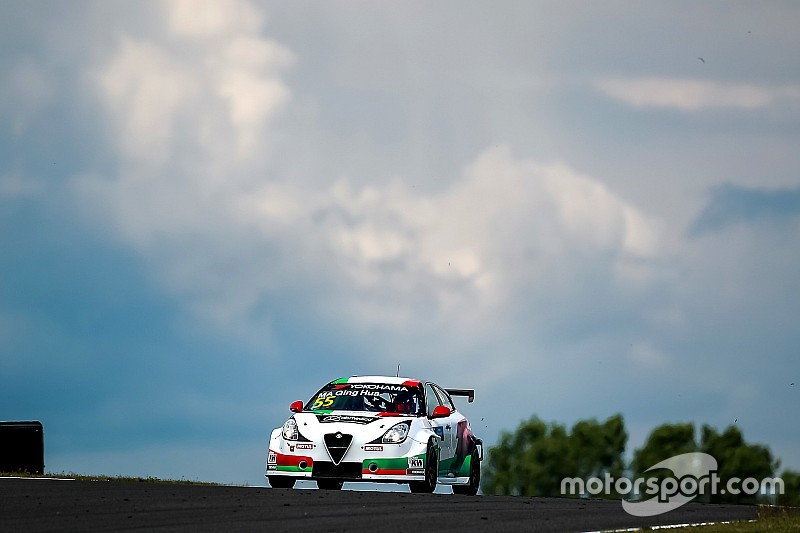 Ma Qing Hua scored his first victory of the World Touring Car Cup era in the final race of the Slovakia Ring weekend, after resisting pressure from Hyundai's Norbert Michelisz.

Alfa Romeo driver Ma was twice a race winner in the World Touring Car Championship with Citroen, and scored his best WTCR result from 15 starts in Sunday's first Slovakia race by finishing runner-up.

That result had its foundations in a strong getaway, and the Chinese driver again made a good start in the finale from third to lead into the first corner.

Ma initially resisted pressure from the BRC Racing Hyundai i30 N of Nicky Catsburg, but the pole-sitter ceded two places to Michelisz and the second Alfa Romeo Giulietta Veloce of Kevin Ceccon on lap five and quickly fell away from the lead battle.

Having briefly broken from Ceccon, Michelisz mounted a mid-race attack on Ma by breaking late around the outside of the Alfa at the Turn 3 right-hander, only to give up that attack as Ceccon came back at him in the second half of the lap.

The lead three settled down again in the closing stages, but while Michelisz made one last attempt to grab the lead he found no way past the Alfa of Ma, who gave Team Mulsanne its first victory with the Veloce model it introduced for 2019.

Michelisz nevertheless moved up to third in the driver's standings with second place, while Ceccon's third-place finish sealed Mulsanne's best result in WTCR.

Niels Langeveld scored his best result since joining the WTCR grid for 2019 by finishing fourth, having bided his time behind Catsburg before moving his Comtoyou Audi RS3 LMS past the ailing Hyundai.

Augusto Farfus charged through the order to a fine seventh in his BRC Hyundai, with Aurelien Panis (Comtoyou Racing Cupra) and reigning champion Gabriele Tarquini next up, and wildcard entrant Luca Engstler completing the top 10 in his Hyundai i30 N.

Cyan Racing's Thed Bjork salvaged some points from the weekend in his Lynk & Co 03 by finishing 11th ahead of Catsburg, while Rob Huff had been on course to finish in the top 10 until he was involved in an incident with the second PWR Cupra of Daniel Haglof at Turn 3 and instead finished 13th.