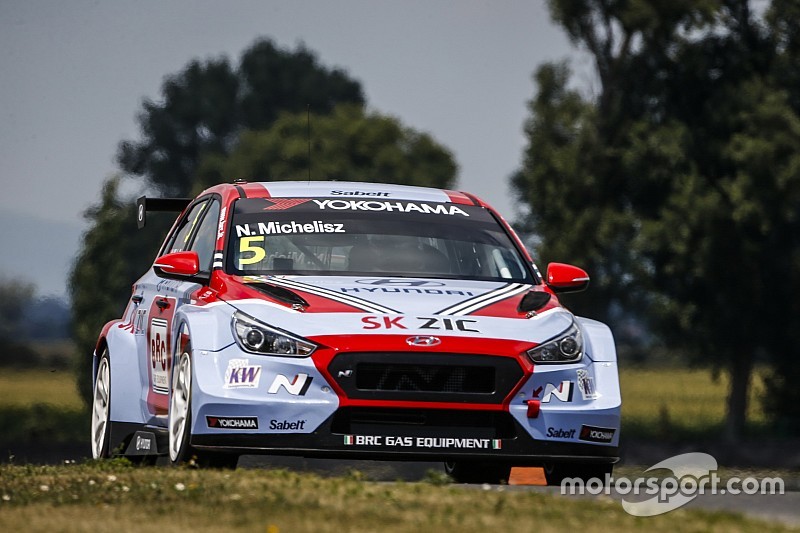 Norbert Michelisz dominated the final World Touring Car Cup race at the Slovakia Ring to finally claim his first victory of the season.

BRC Racing driver converted his pole position into a lead at the start, and was not troubled by the chasing DG Sport Peugeot of Aurelien Comte at any point during the race - from which championship frontrunners Gabriele Tarquini and Yvan Muller retired.

Having expressed concern about his race starts on Saturday evening, Michelisz moved straight over to the right-hand side of the circuit off the line to block the run of Comte, which allowed Muller to clear the Peugeot into the fast Turn 2 right-hander.

The race was then interrupted by a safety car period, called as a result of an initial four-car incident at Turn 3.

Michelisz's teammate Gabriele Tarquini appeared to get into the back of Benjamin Lessennes' Honda Civic, half-spinning the Boutsen Ginion driver round and into John Filippi's Campos Racing Cupra, with Munnich Motorsport's Esteban Guerrieri also caught up.

Contact further down the order occurring at the same corner meant the safety car circulated until the end of lap four, but further drama occurred on the restart as Muller's Hyundai shed a wheel through the long right-hand penultimate corner, which left him beached in the gravel.

Michelisz controlled proceedings from there, setting the fastest lap of the race on the first lap after the safety car before gradually easing off to win by two seconds.

While Michelisz and Comte had easy runs to the finish, there was a fierce contest for the final podium spot.

From seventh on the grid, Comtoyou Racing driver Frederic Vervisch charged around the outside of the first corner and held fourth in the opening stages, which became third when Muller retired.

He was initially chased on the restart by the Team Mulsanne Alfa Romeo Giulietta of Fabrizio Giovanardi - who a day earlier scored the team's first points of the season - who himself was trying to fend off Muller's teammate Thed Bjork.

Bjork had progressed from 19th to fifth by the restart, having avoided the first lap incidents, but was made to wait longer to pass the stubborn Alfa of Giovanardi, who put up an impressive defence that included repassing Bjork around the outside of the tight infield section.

But Bjork had found a way past by lap nine, making contact with Giovanardi in the process, and soon set about hassling Vervisch for third.

The 2017 World Touring Car champion was briefly able to nose ahead of Vervisch exiting the final corner, but the Audi's superior grunt down the main straight allowed Vervisch to sweep back around the outside at Turn 1.

Vervisch kept his nose ahead thereafter to claim his fourth podium of the season, beating Bjork by 0.039s over the line.

Wildcard Petr Fulin crossed the line in fifth, ahead of the second Alfa of Kevin Ceccon - making his WTCR debut in Slovakia - and Giovanardi.

Tom Coronel was eighth in his Honda, ahead of race one winner Pepe Oriola (Campos Racing SEAT) and Zengo Motorsport's Zsolt Szabo, who claimed his second points finish of the season.

Title hopeful Yann Ehrlacher was delayed by the Turn 3 incidents, and was the last of the 15 cars to finish the race having visited the pits after running over the grass infield while attempting to overtake Rob Huff's Sebastien Loeb Racing Volkswagen.