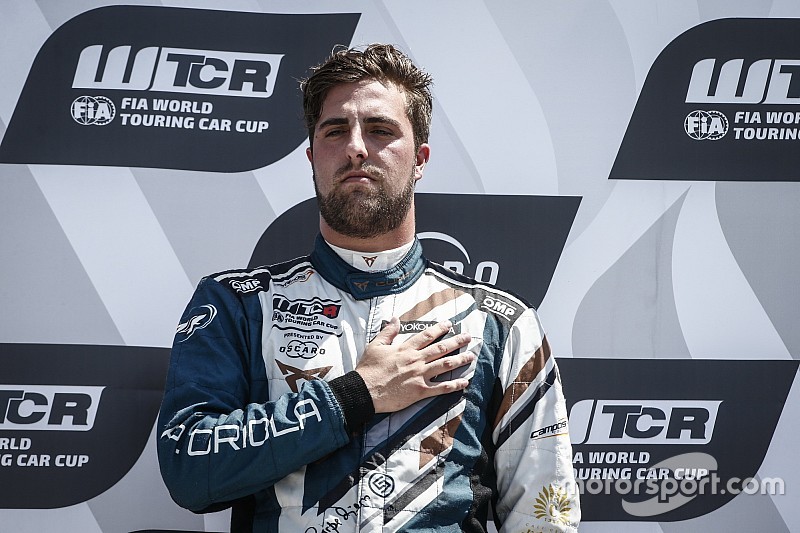 Campos Racing SEAT driver Oriola led the majority of the extended 11-lap race, and avoided a penalty for backing the field up ahead of a mid-race restart to comfortably beat the WRT Audi of Jean-Karl Vernay.

From third on the grid, Oriola was gifted a place at the start when polesitter Gabriele Tarquini bogged down in his Hyundai

He then pursued early leader Aurelien Comte (Peugeot 308TCR), before grabbing the lead early on the second lap.

Despite Vernay swiftly following the Spaniard through on Comte, around the outside of the long Turn 3 right-hander, Oriola was quickly able to pull away at the front - setting the fastest lap of the race on lap three.

But an advantage of more than a second was wiped out when a safety car was called to recover the Comtoyou Audi of Frederic Vervisch.

After a delay in getting recovery vehicles to the scene, Vervisch's car was quickly retrieved - allowing the race to resume on lap seven, but only after Oriola had backed the pack up on the back straight before restarting.

Oriola was investigated for that manoeuvre, but was let off with a black and white warning and again eased clear, eventually claiming his first win of the season by 1.734 seconds.

Behind Vernay, Tarquini - the only Hyundai driver not to be excluded from qualifying for a boost pressure issue - completed the podium, recovering from his sluggish start by repassing Comte on the third lap.

Comte held on to fourth, but only after resisting pressure from Fabrizio Giovanardi - who ended the Team Mulsanne Alfa Romeo outfit's long wait for points with a fine fifth place, advancing seven places from his grid position.

The 52-year-old found a way into the top 10 on the opening lap, then reeled off a string of overtakes into the Turn 1 right-hander to score his first points in any World Touring Car race since 2006.

The last of Giovanardi's overtakes was on title hopeful Yann Ehrlacher, who was the only Munnich Motorsport driver to complete the race.

Teammate Esteban Guerrieri, who started fourth, was hit from behind on the opening lap and lost plenty of time in the pits. He rejoined the race, only to return to the pits before the end of the race.

Veteran Tom Coronel equalled his best finish of the campaign so far with seventh in his Boutsen Ginion Honda, ahead of a trio of Comtoyou Audis.

From the back of the grid, the YMR Racing Hyundai of Yvan Muller and Thed Bjork were able to advance to 12th and 13th respectively.