Honda driver Esteban Guerrieri moved back into the World Touring Car Cup points lead with victory in the opening race at Suzuka, while Andy Priaulx was left fuming after being taken out by Nicky Catsburg. 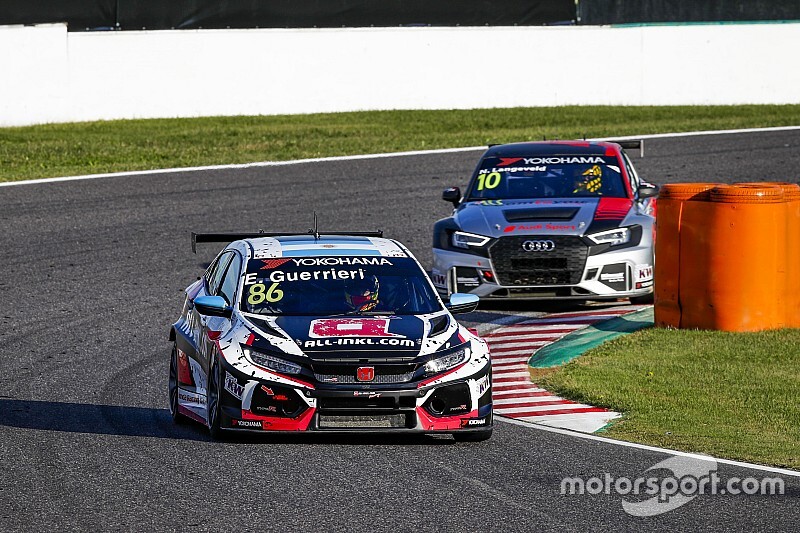 Guerrieri, who had qualified second, started from pole courtesy of a grid penalty for fellow Honda driver Tiago Monteiro, but dropped a position on the opening lap as he squabbled with the Comtoyou Racing Audi of Frederic Vervisch and Niels Langeveld.

While Guerrieri rebuffed Vervisch into Turn 1, Langeveld got a better drive off the first corner and passed both before the run to the Esses.

But Langeveld's spell in the lead was short-lived, as Guerrieri executed a crucial pass on the following lap and retained the lead for the remainder of the race.

Langeveld followed Guerrieri home to claim his first WTCR podium, while Monteiro was gifted the final podium position when Vervisch stopped with a puncture - an incident that brought out the safety car.

The leading Cyan Racing Lynk & Co of Thed Bjork was fourth ahead of race three polesitter Johan Kristoffersson, who brought his Sebastien Loeb Racing Volkswagen home ahead of the WRT Audi of Jean-Karl Vernay.

Yvan Muller started the race in 25th but staged a strong fightback in the race to finish 11th ahead of teammate and nephew Yann Ehrlacher, while erstwhile points leader Norbert Michelisz was 13th.

Michelisz, who now trails Guerrieri by 13 points, was boosted in the order by a controversial late incident between his BRC Hyundai teammate Catsburg and Priaulx.

Catsburg was handed a position by Michelisz in order to attack Priaulx, but the two came to blows at the first corner as Priaulx attempted to defend his position.

Priaulx moved slightly to the right before he braked in order to cover off the inside line, but Catsburg hit the brakes later and hit the Lynk & Co driver, who was fired off into the gravel trap.

The three-time World Touring Car champion later gesticulated in the direction of Michelisz's car as the field came towards the first corner behind the safety car.

Catsburg was classified a provisional 14th, though the incident between he and Priaulx is being investigated, while Aurelien Panis completed the points in his Comtoyou Cupra.

All WTCR races are shown live on Motorsport.tv here.