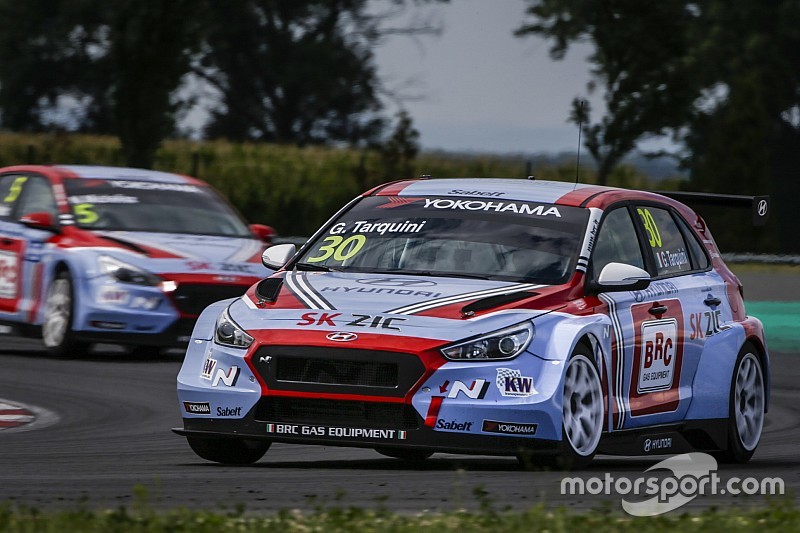 Three of the four Hyundai i30 N World Touring Car Cup cars have been excluded from qualifying at the Slovakia Ring for exceeding maximum boost pressures.

BRC Racing pair Gabriele Tarquini and Norbert Michelisz dominated qualifying, locking out the front row, while YMR drivers Yvan Muller and Thed Bjork were third and seventh respectively – with Bjork set to start the first race from the back of the grid for an engine change.

All four i30 Ns remained in parc ferme on Friday evening for four and a half hours after the end of the qualifying session while a technical report was compiled.

Decisions made after 11pm local time, based on the findings of a report from the technical delegate, resulted in Michelisz, Muller and Bjork all being excluded from qualifying.

Stewards decided in each of those three cases the cars did not respect "the maximum boost pressure, published in the BoP [Balance of Performance] chart for the event". The i30 N's boost had been increased for the Slovakia round.

YMR renounced its right to appeal the decision, while BRC's time to appeal elapsed in the night.

All three drivers have been given permission to start Saturday's opening race from the back of the grid.

Tarquini's car was found to be compliant with the maximum boost figures, meaning the Italian retains pole position.

Boutsen Ginion driver Benjamin Lessennes was also given a 10-place grid penalty after the qualifying session for a third reprimand of the season.