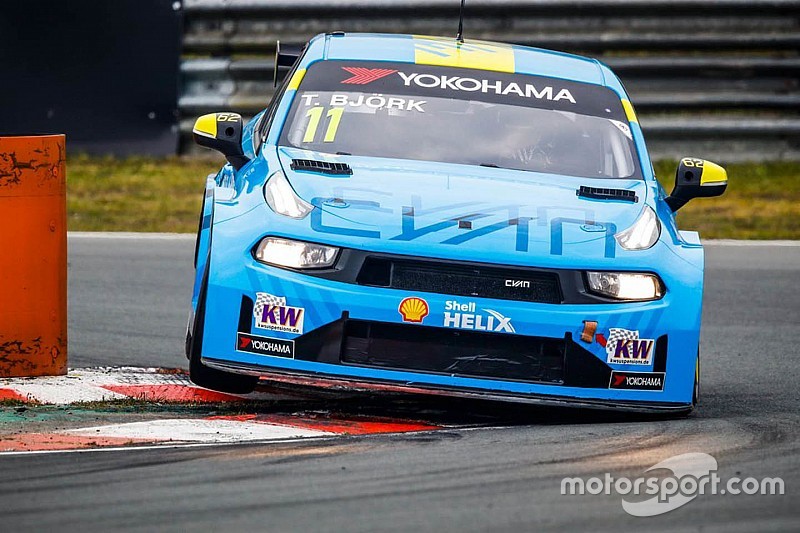 Bjork had led the opening laps of the race but was asked to move aside to allow polesitter Ehrlacher back into the lead, only for the team to direct the drivers to change positions again.

The two were involved in a clash at the start, as Ehrlacher moved over to his right in an attempt to block off the faster-starting Bjork on the run to the first corner.

Bjork had enough of his car up the inside by that point, but Ehrlacher continued to move across and collided with Bjork's Lynk & Co, although both were able to continue.

But Bjork was soon asked to make way for Ehrlacher, who was allowed into the lead at Tarzan at the start of the third lap of 15.

Ehrlacher had a longer stint in the lead and held a steady gap at the head of the order until he was told to let Bjork back past.

The 22-year-old complained to Cyan over the radio and spent a further lap in the lead after being asked to move aside, but obliged at the start of lap nine.

There were no further changes to the order as Bjork clinched his third victory of the season, a result that moved him into second in the drivers' standings, while second still represented Ehrlacher's best finish of 2019.

The destiny of the final podium position was also resolved by a change of order between two teammates, with Augusto Farfus making way for fellow BRC Racing Hyundai driver Norbert Michelisz at the final corner.

Farfus had made a better start than Michelisz and held third throughout the race, before allowing Michelisz - BRC's lead representative in the drivers' standings - past.

Yvan Muller could not recover any of the positions he lost to his exclusion from the final part of Sunday qualifying but still came home fifth in his Lynk & Co, ahead of the PWR Cupra of Mikel Azcona.

Johan Kristoffersson (Sebastien Loeb Racing Volkswagen) was seventh ahead of championship leader Esteban Guerreiri, who made the most of an excellent start to limit the damage done by Bjork's win.

Gabriele Tarquini made up five places to finish ninth in his BRC Hyundai, with Rob Huff (SLR VW) between Tarquini and the fourth Hyundai of his teammate Nicky Catsburg.

Discussions underway for WTCR round at Bathurst