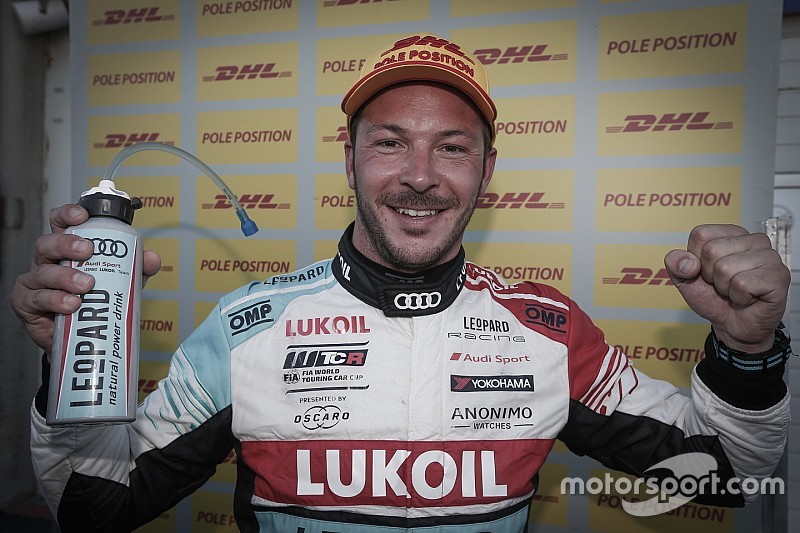 Vernay was the only driver to dip under the 1m44s mark in Monday's qualifying on his sole shootout run, which proved enough to secure pole by a comfortable margin of almost half a second.

The 2017 TCR International Series champion, who will start Monday morning's reversed-grid race from the back of the grid after an engine change, was one of three Audi drivers to make the final part of qualifying.

Running third, Vernay smashed the previous best shootout effort from teammate Gordon Shedden with his lap of the 2.67-mile circuit by almost six tenths of a second, finding half of that advantage in sector one.

Vernay was then guaranteed his first WTCR pole when Q2 pacesetter Frederic Vervisch (Comtoyou Audi) pulled up in the first sector on his shootout lap.

Rob Huff had been second fastest in the second part of qualifying in his Sebastien Loeb Racing Volkswagen, but a moment of oversteer at the Turn 3 Hugenholtz on his shootout lap cost him the best part of half a second.

The Briton was at least able to salvage a place on the front row of the grid, with a fastest second sector of all helping him to pip the second WRT Audi of Shedden - who will start from third for a second day in a row.

Having attempted his qualifying lap, Vervisch will start the finale from fourth ahead of the leading Honda of Esteban Guerrieri.

Munnich Motorsport driver Guerrieri stepped from his Honda before the start of his shootout run and did not attempt a lap.

He will therefore start the final race from fifth, one place ahead of team-mate and race one winner Yann Ehrlacher - who was the fastest driver to miss the Q3 shootout cut.

The 21-year-old had moved up to fourth with his final lap in Q2, going 0.018 seconds slower than Guerrieri, but further improvements from Huff and Vernay pushed Ehrlacher out.

He will start the final race from sixth ahead of Huff's SLR teammate Mehdi Bennani and the Campos Racing Cupra of Pepe Oriola.

James Thompson left it late to set a time in the second part of qualifying, but his final effort was good enough to elevate him to 10th in the order - giving him pole for the reversed-grid race in his Munnich Motorsport Honda.

Race one runner-up Aurelien Comte will share the front row in that race with Thompson in his DG Sport Peugeot 308TCR.

The Hyundai drivers struggled for pace once again, with all four failing to advance to the second part of qualifying.

Yvan Muller - whose car was rebuilt overnight after his race one shunt with Norbert Michelisz - was the fastest of the Korea manufacturer's drivers in 18th, but he still ended up the best part of half a second away from a Q2 spot.