Patrick Dempsey lives in three very different worlds: he has a wife and family, a successful career as an actor, and his career in sportscar racing. He was present at Mazda Raceway Laguna Seca as a team owner and race car driver. Prior to his newest adventure, he competed (and continues to compete) in the rival Grand-Am Rolex Series with a Mazda GT; one would think this is not a man in search of more life challenges. But, anyone thinking that would be wrong, because last weekend, Dempsey began the next chapter of his racing career. He and Dempsey Racing co-owner and friend Joe Foster began their run to prepare for their eventual participation at the 24 Hours of Le Mans in 2013 by beginning their participation in the P2 class of the American Le Mans Series in their Lola Judd car with tires by Michelin. 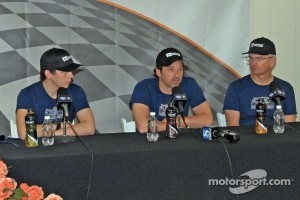 While the local media rhapsodized about having “Dr. McDreamy” in Monterey, perhaps they miss the point. Dempsey is by all appearances a rather humble and soft spoken man who clearly values the life he seems to feel privileged to live. There is no entourage around Dempsey and he seems to relish just being one of the guys as opposed to a movie star out to impress. When asked if his long ago training as a juggler is perhaps a metaphor for his very full life, Patrick Dempsey smiles and admits he does have to juggle his various commitments and that sometimes, one or more of those proverbial balls in the air falls and then he has to shuffle those priorities once again. He did confess that he enjoys changing hats and the whole process becomes more manageable by setting benchmarks.

We did learn that the team plans to contests races three through ten of the 2012 ALMS races. While Dempsey may not be able to drive in all these races, Foster will lead the team regardless of those times and the pair is joined by the young “veteran” driver Jonny Cocker of Leamington Spa, UK. Cocker confessed not to be shy about giving the pair advice, particularly on set up. The car that Dempsey confesses “makes me nervous. I’m getting used to [the Lola] new car which is a beautiful car but little mistakes are costly”.

I felt really good in the car, I learned a lot...

For the weekend at MRLS Dempsey referred to the circuit as “my home track" and he related that the team’s debut is considered more of an extended test. The team’s 4th place class finish in the race was undoubtedly satisfactory as they focused on development and reliability. “My confidence is much, much better,” Dempsey said. “I drove close to two hours, and did very well in traffic I felt. I still have to work on pace, but I drove as fast as I did all weekend consistently. I felt really good in the car, I learned a lot, a lot to build on certainly, and I really enjoy the car.”

This team has race podiums in its future.