Scott Sharp and the Extreme Speed Motorsports (ESM) started their first race in the American Le Mans Series GT class one year ago at Sebring International Raceway. Even though Sharp competed in 2008 and '09 with Duncan Dayton's Highcroft Racing LMP, he elected to take on a new challenge: team owner and driver! 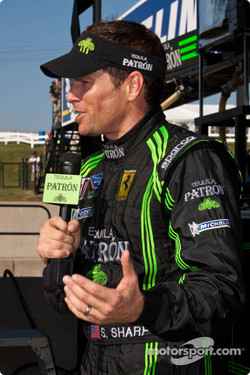 Many were surprised as the co-champion left his prototype ride for a new adventure with little time to prepare but they did made it to the grid for the first race in 2010. "Everyone on our Team put in a tremendous effort from the beginning to build our program step by step, and that certainly showed with our competitiveness at the end of the season. And of course the support and encouragement from our incredible sponsor Tequila Patrón also contributed greatly to the overall success of our Team this year," he said.


This weekend will mark the start of the team, sponsored by Patrón Spirits Company, second year of what is the ALMS's class that always produces close racing action and battles that end many times in the final corner or on the front straight. Sharp's car of choice last year was the Ferrari F430 GT with his co-driver Johannes Van Overbeek. Even though it seemed like a major undertaking for a first-time team owner/driver, ESM later announced that they would campaign two Ferraris.

The President and CEO of Patrón Sprits, Ed Brown would move up from Patrón-sponsored IMSA GT3 Cup to take on the big guns. He was partnered with Guy Cosmo.

The first race of the 2010 season was the longest endurance event, the 12 Hours of Sebring. The Florida road course has a deep rich history and also is one of the most challenging races on the ALMS calendar. It is also a track that truly tests reliability due to its bumpy sections and the transition from asphalt to concrete. It was once a military installation and the old runways still exist.

Unfortunately one of the ESM cars retired but Brown, Cosmo and João Barbosa finished sixth in class.

"I think as I reflect on the 2010 season, I'm extremely pleased how the Extreme Speed Motorsports team grew together," said Sharp. "It was quite a thrash, since our program didn't launch until Dec 2009, to start from a clean sheet of paper and hope you will have everything in place to run competitively at the Sebring 12 hours, only 3 months later!!!" 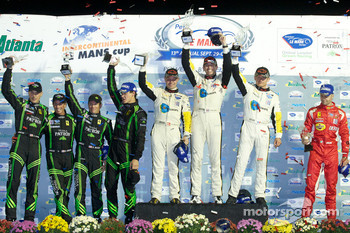 It was an up and down year but all new teams have to cut their teeth. At the season finale in Georgia, the team saw their best finish of second on the Road Atlanta circuit in the Petit Le Mans event.

At the end of 2010, Sharp commented, "The season might be over, but we haven't stopped. We continue to look to improve in all areas and have been diligently spending our off-season doing so. Everyone of the Team is very excited to take delivery of the new Ferrari 458's as well, which should prove to be a fantastic racecar!!"

After his first year driving the Ferrari 430, Sharp was very pleased with the Italian marquee: "The F430 really surprised me in what a pleasure it was to drive. Well known for great handling, the car was quite forgiving and quickly developed a confidence for all of the drivers. In addition, the braking proved to be another great strength of the car. Moving from the LMP1 prototype to a GT, may people cautioned me that I would be less than impressed. In all actuality, the opposite was true!"

With the first season now under their belts and maintaining the same driver lineup, ESM is looking forward to the 2011 season. They will continue to contest in the popular class with Ferrari. Taking on the Porsche, BMW, Jaguar, Lamborghini, Corvette and Panoz teams plus the Risi Ferrari team.

Sharp and the Extreme Speed Motorsports look forward to their second year. After the Winter Test in February, Brown commented, "Last year was an exciting inaugural year for ESM and Tequila Patrón, everyone on the team really came together to deliver a successful season of top quality racing, and from what we saw at Winter Test, I'm confident that 2011 is going to be even more amazing. We have a fantastic new car from Ferrari and a terrifically cohesive and committed team, and that combination definitely equals a lot of podium potential for both cars!"

We're shooting for multiple wins....so we have our work cut out for us!!!

ESM team owner Sharp stated, "I never foresaw the satisfaction I personally would receive from seeing our Team grow from infancy and step by step, get more and more competitive. It was unreal! And this came from 110% effort on everyone's part. We are fortunate to have put together a hugely talented group!!! And this group will help lead us to reach all of our goals. Additionally, I can't say enough about Johannes van Overbeek, Guy Cosmo, and Ed Brown! We have assembled a top group of drivers who all communicate openly, work towards the growth of the team as whole, and are selfless!!!

The 12 Hours of Sebring will officially start on Thursday with the race on Saturday, March 19.

"The GT class is intensely competitive with top cars, teams and drivers. It is an unbelievable battle to reach the podium. We're shooting for multiple wins....so we have our work cut out for us!!!", he said with a true positive attitude.

There is no doubt that Sharp is pleased and excited to remain in the American Le Mans Series and to continue to be in the role of team owner and driver.

He added, "But I believe we will be ready for the challenge!!!!"